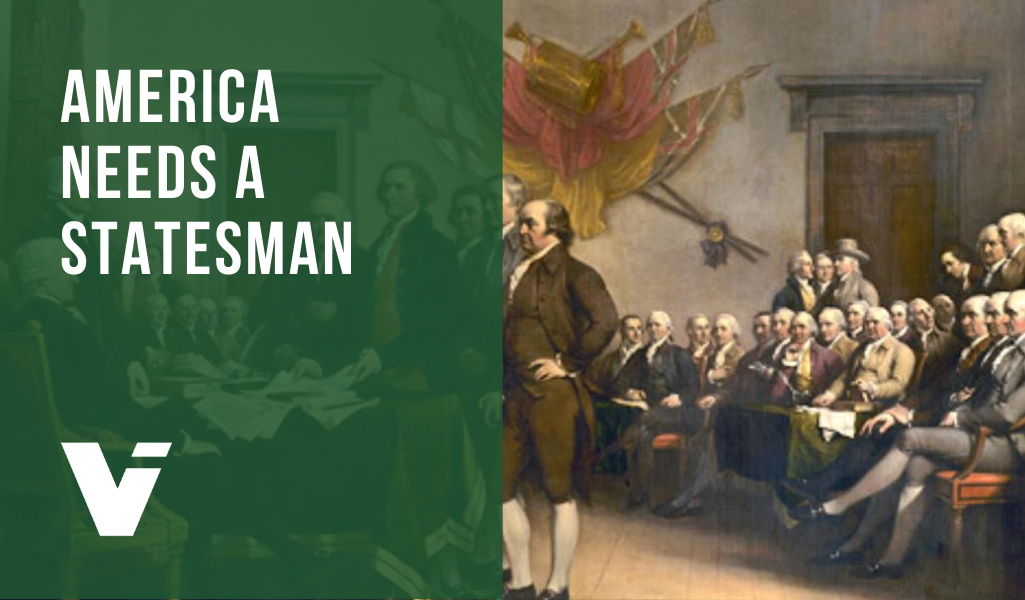 Our politicians today work more for themselves than they do for the good of us, the people. Almost every politician is willing to back any policy that will get them elected, even if they held a polar opposite stance less than a year ago. Of course, switching views on policy seems like a minor infraction compared to the amount of times our leaders get caught in outright lies.

We are more than aware of the corruption of our leaders, evidenced by a 60% decrease in trust in the government over the last 50 years. But this awareness never evolves into change. Why do we never get a better pool of political leaders to pick from?

Our country’s increased partisan polarization and declining emphasis on ethics and values leads many of us to either confusion and apathy or emotionally charged ignorance. When and where will we find a true leader?

That leader will not take the form of a mere politician, but rather a statesman—someone willing to take on the task of promoting the common good by standing up for what they believe in, as opposed to merely advancing a partisan position.

Our country’s founding fathers are beacons of leadership in the dark and murky waters of our current politics. The founding of a country with unprecedented ideas of liberty only happened as a result of great men deliberating fundamental values and eternal truths, in an effort to promote the common good.

In his De Re Publica, Cicero argued that the leader of any state, the ‘“statesman,” needs to possess virtus (virtue), iustitia (a sense of justice), and prudentia (prudence or wisdom). A statesman has taken time to understand what his core values and beliefs are, and he doesn’t back down from them. This emphasis on values is reflected in the statesman’s policies—he seeks to uplift the lives and character of the people.

Philosopher, founder, and 4th president of the United States James Madison epitomized this ethic of deep deliberation leading to emphatic action. Often called the father of both the Constitution and Bill of Rights, Madison’s political theory and philosophy provide the backbone upon which our country still rests. Madison devoted his life to public service and found real joy working for the good of his people.

Like Madison, a statesman is effective at promoting change for the good because he sees working towards the common good as an ever-continuing conversation.

People of goodwill can disagree about the common good and the particular policies that best achieve it, but, if you have a statesman as leader, there will at least be dialogue and the possibility for consensus building. If the leader is a mere politician, concerned only with self interest and winning the next election, he will blindly advance his positions with no dialogue towards common ground.

John Adams provides another excellent example of American statesmanship. Adams was a man of action; without his determination to manifest change, it is unlikely America would have achieved independence. Adams foresaw the direction the colonies needed to go, and he is consistently cited as pushing the hardest for the Declaration of Independence at the Continental Congress.

Adams also embodied the statesmen in his connection between our society’s laws and its values. Adams believed that “human passions unbridled by morality and religion…would break the strongest cords of our Constitution as a whale goes through a net.”

This is a completely different message from what we’re used to hearing—that you have the abstract ‘freedom’ to define character and virtue for yourself.

Where our modern-day politicians preach unqualified acceptance and tolerance (besides tolerating views that don’t coincide with their own), great statesmen of the past would claim that individually seeking out objective truth is one of the greatest goods a citizen can do for him or herself. Statesmen have taken the time and effort to gauge what issues are most important to their constituents. They are true ambassadors for their people.

When we think about our current politicians, especially now as we approach a presidential election year, it is tempting to see them in this light—fighting hard for the pressing issues of the American people. Though some may have honest and true intentions, it is all too common for a politician to stand behind the popular, where a statesman upholds his personal ethical convictions, no matter how unpopular they may be.

George Washington encapsulated what it means to be the ideal statesman, in all senses of the term. The precedents he set to ensure the presidency would never become a tyranny showed his apathy for power and his empathy for the American people.

Washington always kept the good of the people at the front of his mind. The careful creation of a new government in his first term and the strategic avoidance of entanglement in the French Revolution in his second show his role as an ambassador for the nation’s future rather than an envoy for his own personal gain.

We need to engage in this contemplative care for the future more often if we want to see real change. By studying and emulating the virtues and ideas of the great leaders before us, this change can start at the personal before rising to the communal level.

Engaging in meaningful conversations and removing partisanship from dialogue, seeking eternal truths and values passed down to us since antiquity, and ultimately seeking the common good for ourselves will allow us to build a community of future leaders. Our personal search for the good will not only benefit us but those around us. Great leaders will grow up from a fertile bed of great citizens working hard for the common good. Through this work, the statesman will, one day soon, find his way back into our country’s political offices.

The American Conservative – Where is Real Statesmanship When We Need it Most?

Christian ('23) is a prospective Economics major interested in public policy and political philosophy. He spent last summer interning on a Congressional campaign and volunteering for a New York State Assembly campaign. He is also a member of the varsity baseball team.