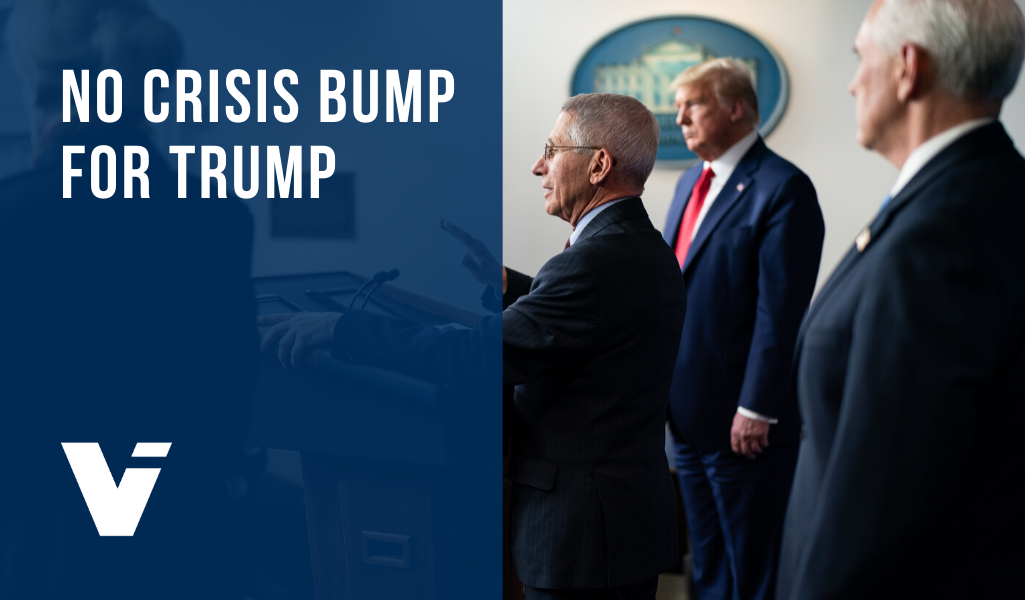 Trump consistently trails state and local leaders, as well as his own health officials, in approval polls as Americans look elsewhere for steady pandemic leadership

On March 30, as US coronavirus cases reached 160,000, President Trump clocked in at 47.3 percent approval, 49.3 percent disapproval in the RealClearPolitics polling aggregate. That may not sound like much, but it’s the highest approval rating the oft-embattled president has had since his first week in office. It looked like Trump was well on his way to a positive approval rating for the first time since his inauguration.

Now it appears unlikely Trump will attain anywhere near the level of popularity that most presidents enjoy during a crisis–like George W. Bush, whose Gallup poll approval went from 50 percent to 90 percent in the aftermath of 9/11. In April, Trump’s approval seems to have hit a ceiling and stagnated. The reason, it seems, is that Americans have turned to other sources of leadership beyond Trump and the federal government.

In New York, home to over a third of all confirmed Coronavirus cases in the US, Governor Andrew Cuomo has seized the reigns of leadership and the spotlight alike from Trump and New York City Mayor Bill de Blasio. Cuomo’s daily briefings have received widespread praise by Democrats and the political establishment for their steadiness, and have often been contrasted with the hectic and inconsistent performances given by Trump at his daily White House briefings.

Cuomo’s polling offers a glimpse at what could have been for Trump. Like the president, Cuomo is a deeply divisive figure in New York despite being a Democrat in a deep blue state. He is normally viewed with disdain by Republicans and residents of upstate New York and distrust by progressives in his own party. In a February Siena poll, his approval rating was 44 percent while his disapproval was 50 percent.

Even in Louisiana, a strongly Republican-leaning state that voted for Trump by 20 points in 2016, Trump’s response is viewed unfavorably compared to that of Democratic Governor John Bel Edwards, who was narrowly reelected last year by just 3 percent. Edwards’ response garnered a 68 percent approval in a new PPP poll, while just 50 percent approved of Trump’s response. When asked to compare the two, 46 percent of respondents favored Edwards’ response while 41 percent favored Trump.

This pattern has been replicated in states across the country, including in swing states that will be crucial for Trump’s reelection bid. PPP polls of Michigan, Pennsylvania and North Carolina gave their Democratic Governors high marks while displaying divided opinion over Trump’s response. A Marquette poll similarly showed that 76 percent of Wisconsinites approve of Democratic Governor Tony Evers’ response, while Trump’s response got 51 percent approval and 47 percent disapproval.

It’s not just Democratic governors. In Ohio, another swing state albeit a Republican-leaning one, 80 percent of voters approve of Republican Governor Mike DeWine’s handling of the crisis according to a BWU poll. 58 percent said the same of Trump. DeWine drew headlines for circumventing a county judge’s ruling and postponing Ohio’s March 17 primary.

But some Governors, particularly those who echoed Trump’s early downplaying of Coronavirus, have fared scarcely better than the president. In a UNF poll in early April, 45 percent of Floridians said they approve of Trump’s response while 53 percent said they disapprove. Republican Governor Ron DeSantis, who resisted early calls for swift action, also drew divided opinion: 51 percent approval, 46 percent disapproval.

Floridians have instead turned to health officials like Dr. Anthony Fauci, who has been seen across the spectrum as a steady and informed voice, as well as a skilled communicator, in an often chaotic, unprepared and undiplomatic White House. Public health bodies like the Centers for Disease Control, the World Health Organization and the Florida Department of Health were also looked on with trust. All polled above 70 percent approval.

Local leaders like the Republican mayors of Jacksonville and the City of Miami and the Democratic mayors of Orlando and Tampa all received high marks as well, with job approval ratings between 60 and 80 percent. Jacksonville Mayor Lenny Curry, like Cuomo and Trump, was underwater before the crisis, with just 40% approval in a St. Pete poll last August.

This is all echoed by national polls which show that Americans broadly trust state and local officials, as well as federal health officials, and approve of the job they are doing to contain and mitigate coronavirus. But with regards to Trump and the rest of the federal government, Americans, as always, remain sharply divided.