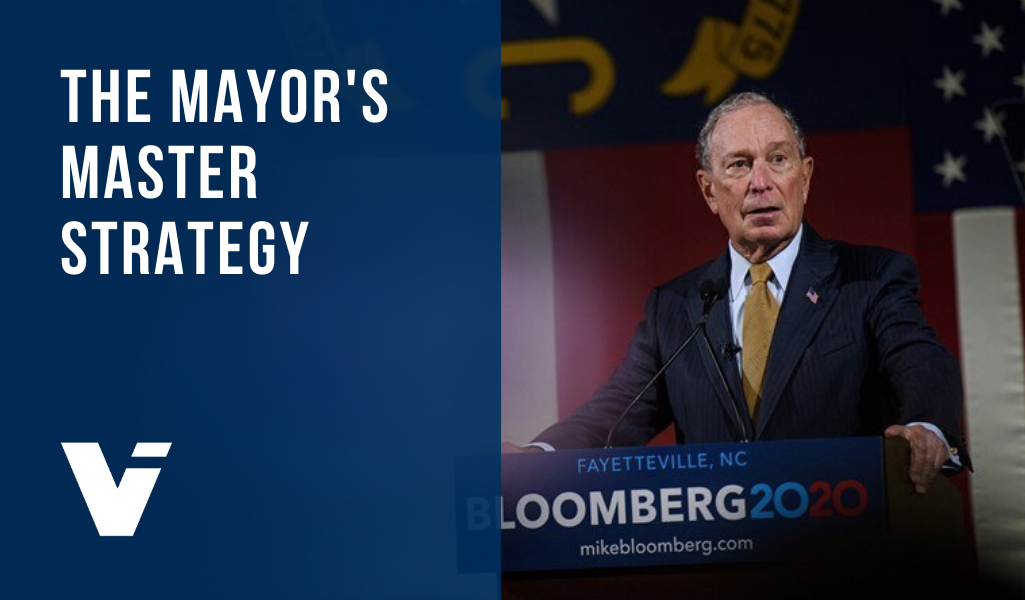 Bloomberg could actually win the nomination. Here's how.

The billionaire former mayor of New York City has only been running for two months, is skipping the first four primaries and was initially viewed as a long shot. That's no longer the case.

Michael Bloomberg, like many well-to-do Democrats, is a recent newcomer to the party. Driven by populist politics and the vulgar personal style of Donald Trump, Bloomberg, who left the Democratic Party in 2001 to run for mayor of New York as a Republican and later an Independent, rejoined the party in October 2018. A year later, he launched a last minute bid for the Democratic nomination for president. Now he seems to be gaining ground.

Buoyed by a dwindling field of opponents and his immense personal wealth, Bloomberg, the ninth richest person in the world, has self-financed his way from dead last to 5th place in under two months (most of his opponents have been running for over a year). In the RealClearPolitics polling average, Bloomberg is at 7.8% nationally, a point ahead of Pete Buttigieg, who is widely viewed as a frontrunner.

Bloomberg’s critics, mostly on the left, argue that his mere existence as a candidate contradicts the modern Democratic Party’s values. One Bernie Sanders fundraising email accused Bloomberg of “using his obscene wealth to buy an election,” calling his campaign “shameful.” Elizabeth Warren similarly declared “Our democracy deserves better,” arguing “we cannot allow the ultra-wealthy to buy our elections and write the rules of our government to benefit themselves.”

Nevertheless, Bloomberg has persisted, blanketing the airwaves with ads and spending hundreds of millions of dollars to try to win big on Super Tuesday (he has opted to skip the four early primaries, knowing he can’t compete against candidates who have been campaigning there for the better part of a year). Now, his bid seems to be gaining unlikely establishment support, garnering the endorsements of U.S. Representatives Max Rose and Stephanie Murphy just this week.

Whether Bloomberg is a serious contender for the nomination is no longer a contentious question. It’s time to start asking if he can win it. To the surprise of many, the answer may be yes.

Those on the left will argue that Bloomberg’s socially liberal, fiscally moderate policies make him a bad fit for a party so deeply enmeshed with labor unions, one which has historically advocated for an expanded welfare state and increased government spending across the board. However, Bloomberg may actually be a perfect fit for where the party is headed, rather than where the party has been.

The Trump era has seen a massive realignment in the partisan coalitions that underpinned most elections from the later half of the 20th century to the early 21st century. Traditionally, Democrats have been the party of the working class, and Republicans have been the party of well-to-do suburbanites. But in 2016, those coalitions, which had already been weakening, began to crack. In 2018 they broke apart completely; Democrats swept suburban House seats in Texas, California, and New York while Republicans seized House and Senate seats in rural areas like northern Minnesota, North Dakota, and Indiana.

Now the Democratic party is inundated with suburbanites–activist liberals and moderates who prioritize issues like gun control and climate change, as well as more granular local issues. These are the exact issues that Bloomberg has focused on in his campaign. It’s no wonder he got endorsements from Murphy and Rose, who flipped GOP-held suburban seats in 2016 and 2018 respectively. He’s playing to their constituents.

This is not to say that Democrats have abandoned the working class. Bernie Sanders is advocating for an outright revolutionary movement of working-class voters. But he may be swimming against the tide with his left-wing policies–53% of the party still identifies as conservative or moderate. That presents an opportunity for Bloomberg. And so does the tumultuous dynamic of the primary.

The primary thus far has been characterized by chaos, driven by a massive and diverse cavalcade of candidates. At its peak, the field featured 24 major candidates vying for the nomination, ranging from a former vice president to a small town mayor to a spiritual guru. The frontrunners have widely been viewed as fundamentally flawed, and the polls in Iowa and New Hampshire show a statistical dead heat between Biden, Warren, Sanders and Buttigieg.

All of this has led to what one venture capitalist has coined FOBO: fear of a better option. In a Politico article, investor Patrick McGinnis argues that indecision has paralyzed Democratic voters, who fear that picking the wrong nominee could lead to four more years of Trump. “Despite the shared aspiration [of beating Trump],” he writes, “the lack of consensus means that the race has the potential to drag on for months, consuming financial support.”

That’s where Bloomberg comes in.

Bloomberg is in a unique position by virtue of his resources and his strategy, bolstered by the indecision of the primary electorate. Not contesting the first four primaries would typically cripple a primary campaign because the victor of those contests tends to emerge with momentum that leads to increased fundraising and a bump in the polls. That would be to the detriment of someone like Bloomberg, who is waiting until Super Tuesday to compete.

But Bloomberg has, in several ways, inoculated himself against those worries. Thanks to his eye-popping ad spending–$270 million in January alone–he has built a firm presence and base of support in states that no other candidate is even visiting right now, thus getting voters in his corner before Biden or Sanders or Warren even have a chance to compete. His virtually unlimited campaign funds also mean he is unaffected by the fundraising woes that typically come from lost momentum.

Beyond his wealth, Bloomberg has the distinct advantage of entering into Super Tuesday and other March contests relatively unscathed. He has largely avoided the kind of media scrutiny that has at times hobbled the campaigns of the frontrunners, campaigning in states like North Carolina and California while most of the political press is camped out in Iowa and New Hampshire. He has also avoided feuds with his foes like the Bernie-Warren conflict that defined early January. He is, in every sense, gliding above the fray.

All of this positions Bloomberg perfectly to present himself as a white knight–the savior of the Democratic Party–in the lead up to Super Tuesday. If, say, Sanders were to squeak out a narrow win in Iowa and a larger but still close win in New Hampshire as the polls suggest he will, it would be followed by a Biden blowout in South Carolina and possibly a modest win for Biden in Nevada. That would lead, more or less, to a stalemate between the leading candidates.

Now, those contests are all polling close enough that the results could be very different from the aforementioned scenario. But therein lies the point: this race is extremely close. It’s unlikely the early primary results will give the decisive outcome, and subsequent coalescence behind one candidate, that anxious Democrats around the country are dying for.

So why not Mike? That will be Bloomberg’s pitch as he positions himself as the perfect foil to Donald Trump. Wielding enough money to buy and sell Trump twenty times over, Bloomberg could wage a campaign of unprecedented magnitude and completely eliminate the financial advantage provided to a President by incumbency. Not only that, but Bloomberg almost always performs better in general election matchup polls than most of his opponents–about the same as Biden, who almost invariably leads the pack. In a party where 60 percent of voters prioritize electability, that alone might be enough for Bloomberg to seize the nomination.