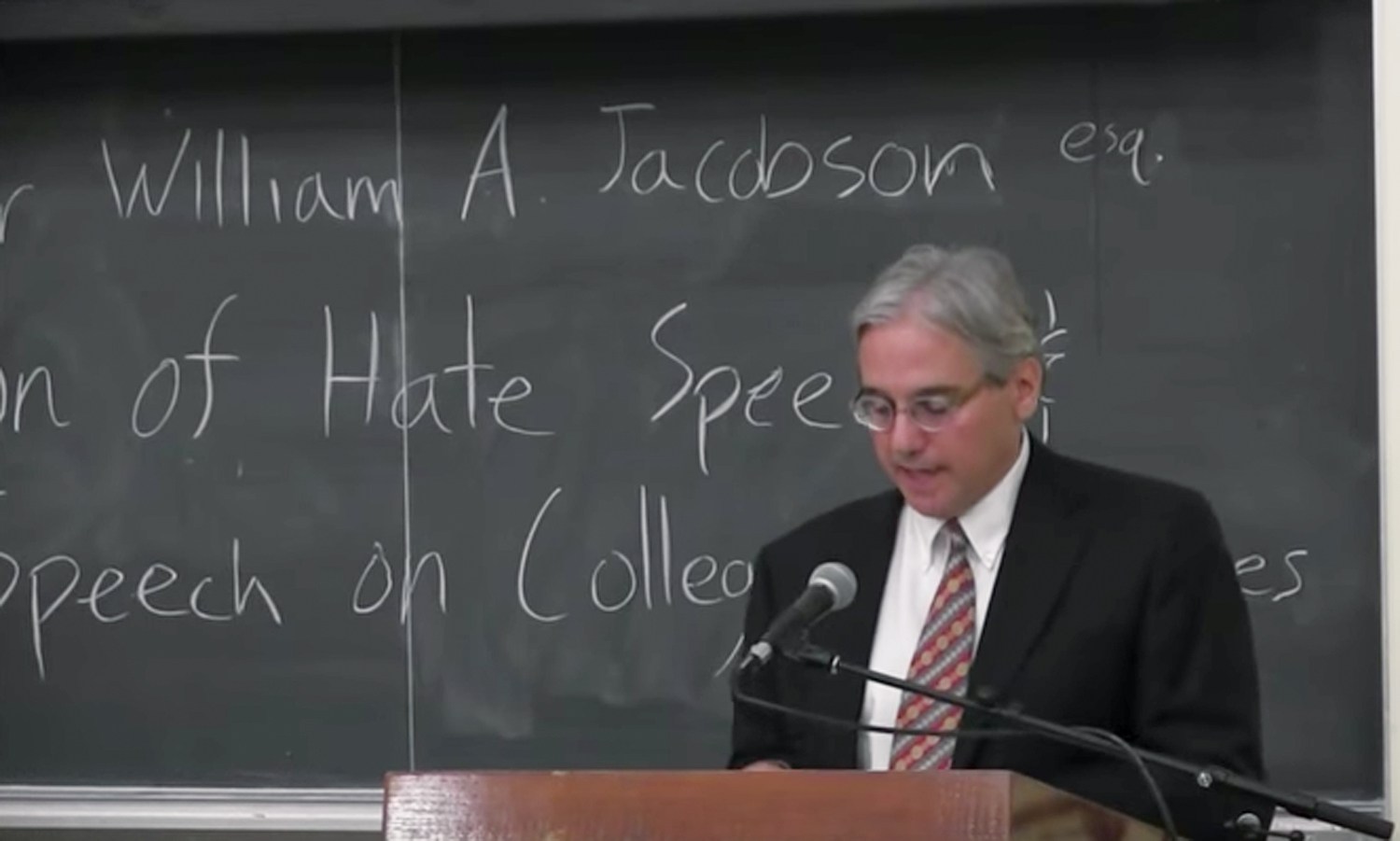 Last semester, William Jacobson, Cornell Law School professor and proprietor of conservative legal blog Legal Insurrection, came to speak at one of the most controversial events I have seen during my time at Vassar. His lecture was straightforward—he argued that the Constitution enshrines the absolute right to free speech in all but extreme cases. A corollary to his main point was that college campuses, as institutions that purport to defend unimpeded discourse and the free transmissions of ideas, should model themselves in accordance with the ideals present within the Constitution. Following this, Professor Jacobson cited the University of Chicago’s code as an example of a successful way in which a college may create an environment that is sympathetic to the guiding philosophy of the First Amendment.

This premise is both anodyne and mainstream; Professor Jacobson’s opinions on the matter of free speech are also held both within the Vassar College mission statement and, for the sake of comparison, by the ACLU. Though I ardently affirm Professor Jacobson’s view that free speech is an absolute right, I found that his lecture moralizing and occasionally tedious, forgoing the nuanced delve into legal scholarship that I had expected. Fair enough: his intention was to make a specific point to an unsympathetic audience. I suppose that Professor Jacobson anticipated far more resistance from the student body than he ultimately received. As did I. The event was exceptionally successful, with over 200 people in attendance (it should be noted that the large majority of these people had not arrived as protesters). Audience questions, while sometimes of the polemical and performative “point-scoring” variety, were well-articulated and generated informative responses.

However, Professor Jacobson was unaware that most of the madness had already been precipitated in the days before the event by progressive student organization Healing to Action, also known as H2A. Though it shares a name with a national group based out of Chicago, I cannot find much of a correlation between the two group’s activities and ideologies. H2A came to prominence last year when it organized a unity event against prejudice in general when it was discovered that racist epithets and slogans had been written in the stalls of the Thompson Memorial Library bathroom. For reasons that will probably remain inscrutable, H2A deemed it necessary to respond in kind to a free-speech lecture delivered by a right-of-center law professor.

The meticulous, multi-stage plans published by H2A to valiantly combat Professor Jacobson’s lecture speak to the degree that resistance has become a form of performance, exciting in and of itself to students who probably wish they could rebel against an ideologue more malevolent than a soft-spoken academic from Cornell. H2A published an interminable series of plans, extraneous revisions to those plans, stipulations to be more inclusive to certain demographics, and itineraries fit for hurricane relief. President Bradley put it mildly when she thanked H2A for “tirelessly and creatively [developing] safety teams and plans.” There is a certain fetish that exists for contrivance and mobilization, and its energizing momentum was palpable in the dumb verve with which H2A organized its performative countermeasures.

Notably, prior to the speech, an absurd document was disseminated that, among other things, contended that white nationalists from surrounding areas had been summoned at the behest of Professor Jacobson’s followers to attend the lecture—an assertion proven false by my co-Editor in a column in the Miscellany News. Another physical message circulated by H2A (in true DIY “zine form”) came appended with a rather sinister injunction—those who opposed Professor Jacobson should attend the event wearing black clothing so that they might identify their allies with facility, and sit in the back of the room, so that they could escape in the event of violence. In spite of the fact that the exits of Rockefeller Hall Auditorium are actually located in the front of the room, this did not prevent protesters from assuming their positions during the event. Elsewhere, students were doing the oft-maligned “coloring book and cookies” self-care repertoire, which seemed an innocuous enough activity to me. This letter, which was delivered to the student body via the Vassar Student Association reads,

“Last Night Healing to Action met with over 200 students, faculty, and admin. We spoke about our concerns and what actions we need to collectively take on Wednesday. The VCLU-sponsored lecture "Hate Speech is Free Speech, Even After Charlottesville" will be happening tomorrow, and we must protect the people that this speaker has targeted in the past. The speaker, William A. Jacobson, has shared this event on multiple white nationalist websites. In publicizing his Vassar visit, he comments: 'The event is open to the public. So if you’re in the neighborhood, drop by. I love that.'  This is an active encouragement for other white nationalists to come to the event. There will be people coming from outside the campus, there is the potential for violence. We MUST collectively prioritize safety and ensuring we do not feed into their rhetoric of destruction.”

Of course, there will always be provocateurs at any institution, and their voices are usually the loudest. In a climate that rewards activists for the extremity of their positions and conflates volume with sincerity, it is no surprise that somebody would seize the opportunity to incur disruption. This letter was perhaps the root cause of the incredibly hostile reaction to Professor Jacobson’s presence on campus. H2A promulgated similar idiocy in the form of an article written in the Miscellany News, whose thesis is that “the Constitution was created to justify genocide of indigenous peoples and institutionalize chattel slavery” and as such, the stipulations contained therein should be nullified. This argument is devoid of any correlation between the ideals of the Constitution and the institution of slavery, or an example of how protections of speech promulgated it.

Given that the claim of white nationalism was eventually proven false, H2A evidently had to redouble on the equally untenable idea that the Constitution is inherently racist. The argument here relies on obfuscation and identity politics, denying that the ideals enshrined within the First Amendment supersede the era in which they were written. Crucially, H2A’s position denies that the First Amendment's universality has aided the moral trajectory of the United States’ history, and has historically abrogated the power of those who would otherwise control discourse.

To H2A, “white supremacist” evidently means anything that might be said to support the status quo. One can only imagine what a “white supremacist website” is by their standard. This is where the Vassar Student Association is decidedly at fault. Bomb-throwers will always exist, but their power comes through mainstream sympathy. There exists at Vassar a tangible culture of refusal to criticize those who might be members of a vulnerable demographic. A refusal by the VSA to distribute H2A’s message might easily seen—and yes, this term has really been used—as an act of violence. The VSA’s reaction to the campus chaos it created was to neglect all mention of their distribution of H2A’s letter, and then to make an apology to sympathizers of H2A for even allowing the lecture to take place. These are the perils of a student government that puts such stock in its public activist image.

Certainly H2A’s stance is symptomatic of the absurd sort of performative, social-capital-generating “conspicuous activism” that both right-wing and liberal commentators often indicate as some of the most extreme manifestations of the intellectual and moral decline (if not decadence) of American collegiate youth. The accusation of white supremacism, which Professor Jacobson thoroughly denounced as “disgusting” during his speech, was entirely unfounded, and perhaps libelous. His blog, though a confluence of hyperbolic commenters, is certainly neither racist nor classist. Certainly, Professor Jacobson and his blog are conservative. But if classical liberals and left-of-center liberals cannot rally behind a mutual respect for the First Amendment, the future might be grim.

Indeed, rumors circulated in the days leading up to the speech became so distended and bizarre that many of my classmates were justifiably quivering with the thought of imminent violence and disorder descending upon our quiet college. The campus milieu was made febrile because the event had been advertised as a kind of retrospective coda to the Charlottesville marches—the original title proposed by Professor Jacobson for the lecture was “Hate Speech is Free Speech, Even after Charlottesville.” Conjuring the specter of the Unite the Right rally, a reminder that words really do possess the capacity to move others to violence and murder, ought to strike any critical bystander as a low form of opportunism engineered to incite maximum invective, if not confusion. Furthermore, the title recalls those of the far-right, who, perhaps in the spirit of “irony” that has become their trademark, deployed the term “free speech” as a dogwhistle for their sinister ideologies. I do not suppose it is reckless to suggest that all people be cautious of the words they use in this era of alternative facts—H2A reminds us that the American right does not hold a monopoly on this kind of language.

As a result of the decidedly confounding title, the lecture title was officially amended to “An Examination of Free Speech on College Campuses.” However, a last-minute decision by a rogue member of the VCLU restored it to its original form after Professor Jacobson apparently threatened to cancel the event. I believe much of the initial response to the arrival of Professor Jacobson stemmed from students’ visceral reactions to the ominous undertones of the event’s title. Furthermore, I propose that the Vassar Student Association disseminated H2A’s surreal letter regarding the non-existent white supremacists as a grossly misguided attempt to atone for sanctioning the lecture’s incautious title.

This begets a salient question—what were the non-H2A-affilliated protesters protesting? It would be naive to suggest, as many of Professor Jacobson’s followers have in the comments section of Legal Insurrection, that these students comprised membership within some kind of leftist cabal, goaded into action by sinister professors intent on extirpating the principles upon which democracy is founded. Though a favorite on Legal Insurrection, this line of argument gleans its absurdity through its combination of hyperbole and reductionism. When interviewing some of those at the protest event, I learned that most of them did not harbor anti-free speech views, but rather a reluctance to challenge the opinions of their friends who were misled by a small core of overzealous activists whose rumors were propagated by an uncritical student body and absent-minded student government.

It’s time to acknowledge that H2A and the VSA lied to us.

Contact your VSA rep and H2A for insights we couldn't provide.