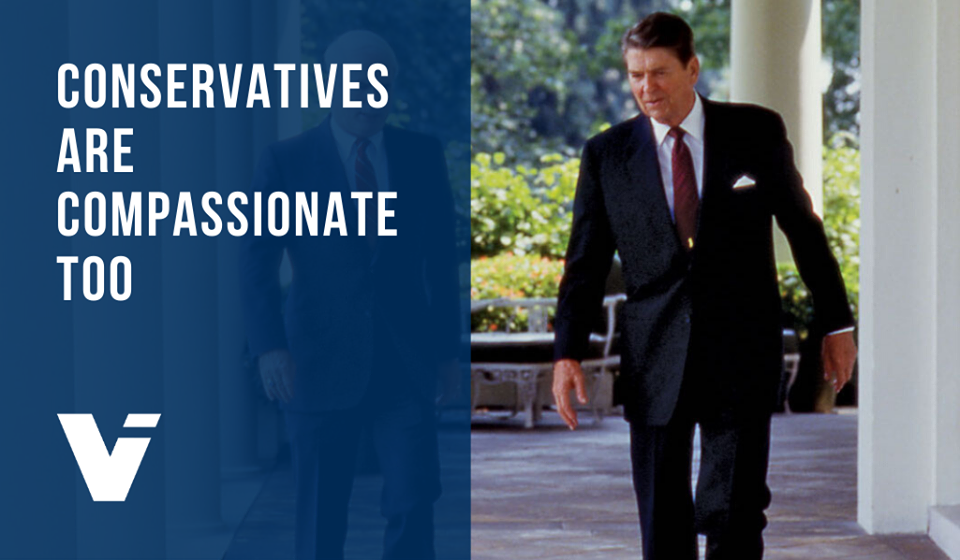 Conservatives are compassionate – and they need to own it

Managing Editor Teddy David argues that conservatism gets a bad rap from liberals when it comes to compassion.

Perhaps the most common slander against American conservatives is that they lack compassion. It usually goes something like this: “Conservatives only care about people at the top–their economic policy proves it. If they cared about the less fortunate, they would support larger government programs funded by higher taxes on the wealthy.” From tax rates to the social safety net to healthcare and more, conservatives cannot escape the accusation of heartlessness.

It’s not that conservatives are proud of being heartless. Quite the contrary–many conservatives will passionately object to these charges. Yet still, in the political arena, these same people have surrendered the label of compassion to the left. They have crafted a compartmentalized self-perception of personal compassion, but political hardheadedness and immunity from the tear-jerking rhetoric of the left.

In short, by rejecting the label of compassion in the political sphere, conservatives have unintentionally bowed to the left’s talking point that compassion and conservative policy are mutually exclusive. In doing so, they have ignored the rich tradition of moral philosophy undergirding conservative beliefs in favor of a deadening political orthodoxy of limited government, lower taxes, and gun rights.

So why did conservatives reject compassion as a political label in the first place?

This can be chalked up to a reaction against the left-wing notion of compassion, holding that the government can be a compassionate force towards its people. It exercises this compassion through social programs designed to benefit the less fortunate. And it pays for these programs by taxing the more fortunate. Thus, support for this agenda and the tax policy that provides for it is, in itself, compassionate.

Of course, conservatives object strongly to this belief, but they have largely failed to articulate any alternative view of compassion, leaving the field to the left and retreating to their political liturgy. This cession of compassion to the left has allowed them, seemingly reasonably and without substantive opposition, to paint the right as heartless.

Despite the failure of the conservative movement to continue waging this uphill battle against ossified misperceptions, they are just that–misperceptions. As I’ve said already, conservatives are compassionate, just not in the same way as the left.

Take the 13th, 14th, and 15th Amendments to the U.S. Constitution, passed near the end of and immediately following the Civil War. This sweeping reform and the occupation of the South by Union troops to enforce it was absolutely necessary to begin the long and still continuing process of righting the ultimate evil of slavery–an evil manifestly antithetical to American ideals.

This was a good and just act. It was not, however, a “compassionate” act. In this case, the government acted to defend the rights to which formerly enslaved black Americans should already have been entitled. This is the paramount role of the American government. It does not deign to grant certain privileges unto its citizens, it protects their natural rights–the rights that preexist government, but nonetheless need some centralized force to defend them.

The belief that compassion must be voluntary is the core of the conservative view, and conservatives do not only talk the talk, they walk the walk. Given that the United States is the most charitable country on earth, an instructive set of data to look at on this point is charitable giving. I’ve drawn the following statistics from 2012 IRS data compiled by the nonprofit Philanthropy Roundtable.

According to this data, 31% of Republicans donated $1,000 or more to charity annually compared to 17% of Democrats. Self-described conservative households had 6% less income than self-described liberal households, but they donated 30% more of that income to charity than their liberal counterparts.

By percentage of gross income donated to charity, the top 15 states all voted Republican in 2016, and 12 out of the bottom 15 voted Democratic. Applying the same criterion to cities, we find that the top 15 are all either Mormon (Salt Lake City tops the list) or in the southern “Bible Belt.” On the other hand, many wealthy liberal metropolises like New York City, San Francisco, and Philadelphia rank in the bottom 15.

Nevertheless, these statistics do pose the question of what impact the individual versus governmental notions of compassion for the less fortunate have on charitable giving. They seem to suggest that liberals are more willing, in effect, to outsource their compassion to the government.

So, my message to the left is this–conservatives are not heartless; we are full of heart. We love this country, we are deeply concerned about its problems, and we want what’s best for all its people. We may have different solutions, many of which involve less government and not more, but if you’re willing not to impugn our motives, then we’re ready to talk it through.

And to conservatives–be proud of your compassion. Enough with the facade; enough with the provocateurship; enough with the philosophical laziness. It may not interfere with your charity, and your fellow conservatives may see through it all, but it only confirms the left’s stereotypes. Most importantly, stop taking the easy road and get out there. Call out hateful rhetoric wherever it appears. Talk to people outside of the base and make the full case for a vigorous and compassionate conservatism.

Real Clear Markets – Whatever You May Think of Republicans, Don’t Call Them ‘Stingy’

The Heritage Foundation – The False Compassion of Liberalism