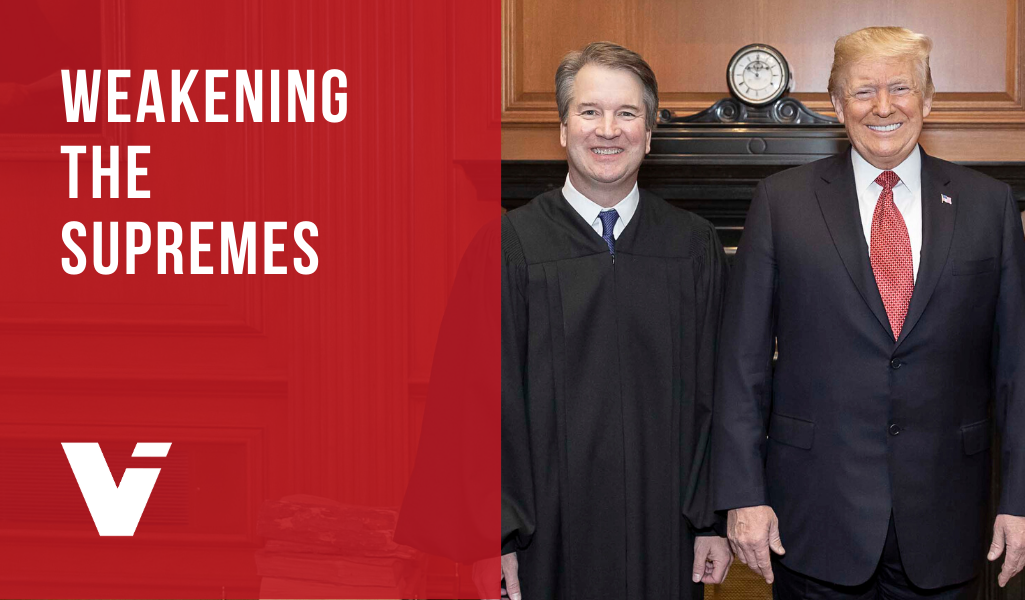 Christian Baaki argues that the practice of judicial review has made courts too powerful and susceptible to partisan manipulation.

In a recent tweet, President Trump happily announced his record appointment of 187 federal judges, and two Supreme Court justices. At the same time, a Fox News article praised Trump for his dedication to reshaping the federal judiciary by mitigating any “liberal bent,” and a Washington Post account identified Trump’s “ensuring a conservative tilt for decades.”

Though any conservative would, and should be, happy about the appointment of conservative judges, just as any liberal would have been happy with President Obama’s liberal imprint on the courts, there’s a deeper and more dangerous game being played beyond the back-and-forth struggle for political power: the politicization of the courts themselves, and the fallacious national assumption of judicial supremacy.

There have been a multitude of moments over the last century and a half that have widened the gap between the courts as political vehicles and the courts as upholders of the Constitution.  However, there is no clearer recent example of the increasing politicization of the judiciary than Justice Brett Kavanaugh’s confirmation to the Supreme Court in 2018. The hearing for the sexual misconduct accusations made by Christine Blasey Ford, and the question of whether or not Justice Kavanaugh was fit to be appointed, was more political than anything else. There was a clear partisan divide in opinion and storyline, because there were clear political consequences.

In 2016 Trump ran on a promise of filling the benches with conservative judges. He has kept that promise, and has been using his judicial nomination success to fuel his 2020 campaign. All Americans, especially conservatives, should refrain from immediately praising President Trump's 'success’. Politicization of the courts is a short-lived game with immediate consequences after the favored party loses power

The politicization of the courts can be seen as an immediate consequence of the widespread assumption of judicial supremacy. Judicial supremacy, the prevalent notion today that courts can rule over the two branches of government and the Constitution, is completely obverse to the original intent of the judicial branch. In Federalist no. 78, Hamilton explains why the judiciary should actually be properly understood as the weakest.

Of course each party now wants to control the courts, because the courts are seen as holding the ultimate last say on matters of rights and constitutionality. Professor Paul Dehart, Professor of Political Science at Texas State University, correctly identifies that “judicial review is now bound together with the doctrine of judicial supremacy, crafted by Chief Justice Roger Taney in Ableman v. Booth [1859]—the case that infamously upheld the Fugitive Slave Act.” However, this is a view irreconcilable with constitutional order and republicanism itself, moving power from the people to a select judicial elite.

In an essay on the political implications of judicial supremacy, Professor Robert George of Princeton University acknowledges that the Supreme Court’s ruling in Marbury v. Madison (1803) seeped this aggrandizement of judicial power into American law. This view is heavily debated, as others see the Marbury decision as only reiterating an already accepted idea. However, Jefferson, Hamilton, and Madison each previously condemned a rising of judicial authority.

George also shows how this view was condemned by Lincoln: “For Lincoln, then, the evil of the Dred Scott decision was not merely the expansion of slavery. It was that the decision threatened to undermine the basic principles of republican government precisely by establishing judicial supremacy in matters of constitutional interpretation.” So Lincoln dissented from Dred Scott not only morally, but also constitutionally.

This drastically contrasts with today’s political climate, where each side defines its own morality and uses its power to push policies aligned with their own agendas. Instead of using courts to push and cushion political preference, a focus on constitutional concern needs to be maintained.

On the surface, President Trump’s historic judicial record seems to be a win for conservatives. In reality, if this reliance upon federal courts to push agendas continues and grows, it’s a loss for all. Conservatives should be wary of how quickly power can shift and how dangerous a precedent the partisan-judicial alliance is.

If we fall victim to politicking within our courts, we throw away the very autonomy and independence that allows for a government run of, by, and for the people.

In his First Inaugural Address on March 4, 1861, Abraham Lincoln once again rejected the Dred Scott decision and explained to the American people there was, is, and always will be much more at stake: “The candid citizen must confess that if the policy of the government upon vital questions affecting the whole people is to be irrevocably fixed by decisions of the Supreme Court, the instant they are made in ordinary litigation between parties in personal actions, the people will have ceased to be their own rulers, having to that extent practically resigned their government into the hands of that eminent tribunal.”

A return to limits on judicial authority, and an emphasis on depoliticizing our federal courts, will spark a more virtuous, civil, and flourishing government and nation.

Christian ('23) is a prospective Economics major interested in public policy and political philosophy. He spent last summer interning on a Congressional campaign and volunteering for a New York State Assembly campaign. He is also a member of the varsity baseball team.