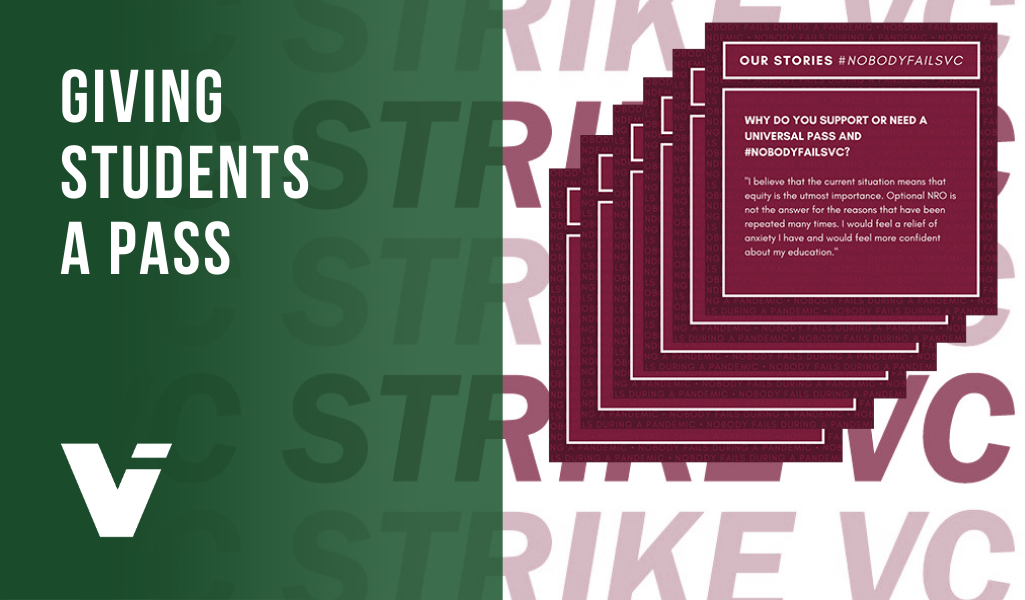 Editor Sarah Kopp breaks down the 'Nobody Fails VC' strike.

As Vassar finishes its fourth week of remote education as a result of COVID-19, the administration’s grading policies have come under scrutiny from the student body.

On March 23, Dean of Studies Debra Zeifman notified students that the faculty voted to allow them to choose the Non-Recorded Option (NRO) for any classes this semester, regardless of major requirements and other pre-existing limitations. NRO allows students to set a minimum grade with which they would be comfortable showing up on their transcript— anything below that chosen grade would be shown as a pass or fail.

In a statement sent to students on April 15, Vassar President Elizabeth Bradley said, “In adopting NRO, Vassar is in keeping with many of our peer liberal arts colleges, most of whom have adopted an NRO-like approach, and we are giving considerably more agency to our students.” She added that she “supports our faculty” and “knows that they will work hard to ensure students can complete this semester successfully.”

The NRO policy has been met with mixed reactions. Students frustrated with the measure have been petitioning the administration to consider two alternatives. The first is ‘universal pass,’ in which every student passes this semester, meaning every course would show up as a ‘pass’ on transcripts.  The other is ‘A/A-,’ which, as the name suggests, would require professors to assign students a grade of either A or A-, chosen at their discretion.

This petitioning has culminated in the formation of Nobody Fails VC, which is pressing the administration to adopt the aforementioned measures and address other issues that have arisen from remote education.

Beginning on April 20, students supporting Nobody Fails VC will be participating in a ‘strike’ if the administration does not respond to their demands before that time. The group has issued seven demands: a no-fail grading policy, a universal survey and syllabi reevaluation, emergency funds available to students who are in need, complete work-study allocation, the reversal of a planned 4.5% tuition increase, financial protections for staff and faculty, and meetings between students and administration as the remote study continues to check-in regarding these issues.

“I’m striking not just for myself but for everyone who needs what we’re demanding,” said a student organizer for Nobody Fails VC, who asked only to be identified as Devin. “We aren’t perfect, we’re only humans, but as humans we deserve compassion and your trust when we say that this is what we need.”

The strike, according to an email sent by Nobody Fails VC on April 15, follows a model used by student organizers at the New School in New York City. The first action was staging a sit-in during President Bradley’s virtual tea on April 15. At its peak, nearly 200 students participated, with many voicing their issues with the current policies.

Going forward, organizers say, the strike will involve not attending online classes or submitting online work. Students who are uncomfortable skipping classes may instead use a ‘Vassar Strike 2020’ icon for their Zoom background in lieu of their webcam.

The strike will also include refusing to register for classes for the fall semester. If this does not work, the organizers added, protestors plan to occupy the campus in some form once the student body returns and it is safe to gather in large groups.

Citing testimonies from the Nobody Fails VC Instagram, organizers mentioned intense pressures posed by remote education ranging from financial burdens, sick or dying loved ones, increased mental health issues and stress, and unreliable internet access. They also pointed to what they see as obvious inequities that the current grading procedure creates. Students with more challenging environments will likely struggle to maintain their grades and health or fall behind, they argued.

“Everyone has too much to deal with,” Irani said in an email to students laying out her grading policy. “I don’t think anyone should be at all concerned about grades while they are also worrying about family/friends,” she wrote, adding “things are just too unpredictable right now.” She also believes grades “construct particular kinds of non-trusting faculty-student relationships” which are particularly undesirable during the pandemic.

But organizers have expressed dissatisfaction with the patchwork system that results from some professors being more lenient than others. “This policy does not protect students,” Nobody Fails VC says, “it guarantees that students will have varying degrees of pressure and stress, all depending on what their professor decides.”

While there is substantial and vocal support for policies like universal pass and A/A-, some students are wary of the measures being proposed by organizers. One such student, who spoke to the Insider on the condition of anonymity, said that universal pass “provides no incentive to learn.” They did, however, say they would support A/A- because “some sort of safety net is needed, but hopefully one that fosters a good learning environment.”

Student organizers are still finding their footing with Vassar’s new, more disconnected public spaces in order to voice their concerns about a system they view as inequitable. Though these are certainly unprecedented times, the student body is evidently not content to let the lack of physical forums and discussion spaces keep them from holding the administration accountable.

Sarah (’22) is a Senior Campus & Culture Editor. She is a history major from Long Island. She is a recipient of journalism awards from the Long Island Press Club, Long Island University, and other local organizations. She recently interned at Harper’s BAZAAR. She is currently a member of the Women’s Chorus and the president of March for Our Lives at Vassar.