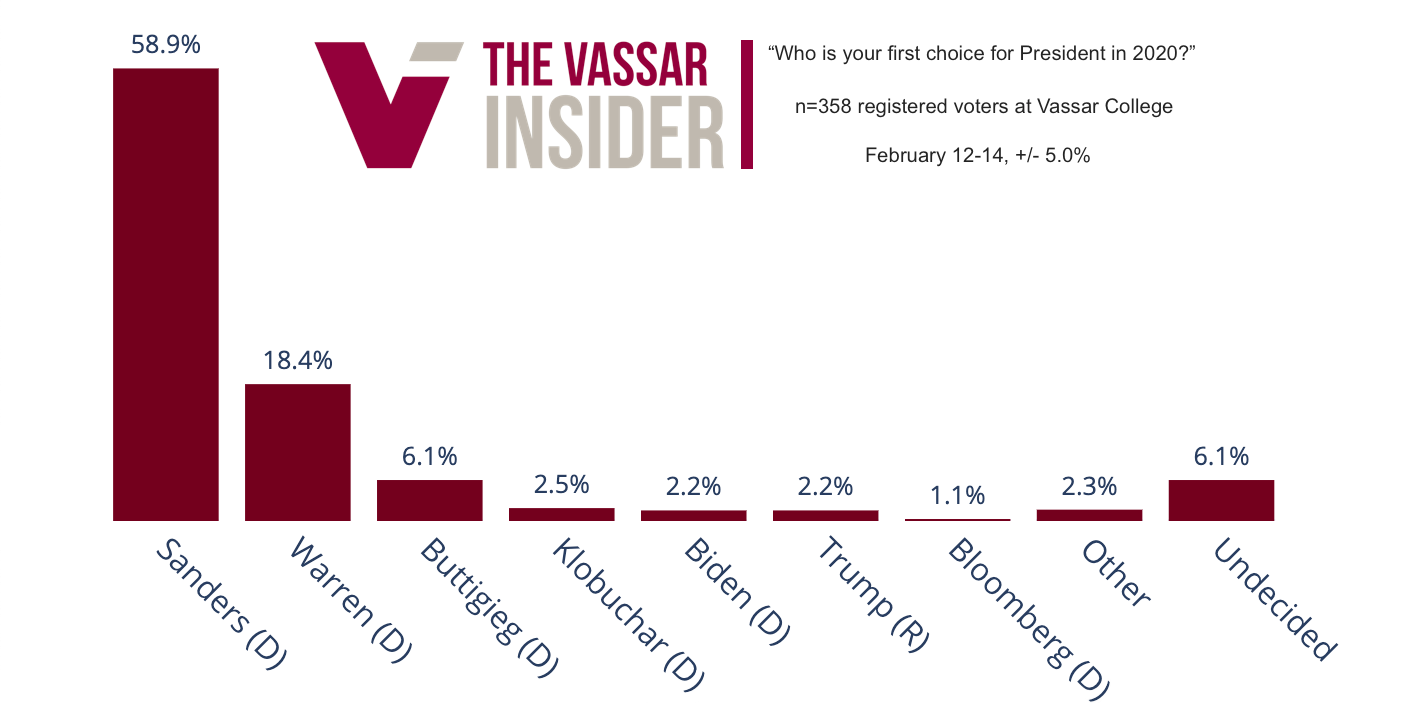 We polled 358 registered voters at Vassar on the 2020 election, politics and policy. Here's what they had to say.

With primary season heating up, the Insider decided it's time again to take the temperature of the Vassar student body. With improved methodology and questions, we followed up on our poll from September, 2019 and found that some substantial changes in opinion have taken place in just five short months.

On Wednesday, Vassar’s office of Institutional Research sent out a Google Form, created by the Vassar Insider, to 350 randomly selected student emails in each class year, for a total of 1400. The poll was only accessible by email addresses within the Vassar educational app suite. It was conducted between Wednesday, February 12 and Friday, February 14.

By far the largest change between our September and February polls was the positions of Vermont Senator Bernie Sanders and Massachusetts Senator Elizabeth Warren. Whereas in September, Warren led Sanders by 17 points, 38.7% to 21.7%, now, Sanders leads by an enormous margin. This time around,  58.9% named Sanders as their first choice, compared to just 18.4% who chose Warren.

This poll represents a 37.2% gain for Sanders and a 20.2% drop for Warren. This loosely reflects national trends; while Warren narrowly led Sanders in the RealClearPolitics national polling average between September 3 and 6, Sanders now leads Warren by more than ten points.

The number of undecided voters dropped by about 3%, from 9.4% to 6.1%, while Joe Biden and Pete Buttigieg both saw drops in their support. Biden’s support got cut nearly in half, from 4.3% to 2.2%, while Buttigieg dropped from 8.3% to 6.1%. Klobuchar went up considerably, from 0.3% to 2.5%, as did Trump and Bloomberg, who began his campaign in November.

When asked who they would vote for in hypothetical general election matchups between Democratic contenders and President Trump, respondents, unsurprisingly, backed Democratic candidates by vast majorities in every scenario. However, there was some variability.

Sanders garnered an astonishing 92.7%, with just 3.6% for Trump and 3.7% voting for third party or write-in candidates, or sitting out the election. Other, more moderate candidates like Pete Buttigieg and Joe Biden fared somewhat worse. 10.3% of respondents said they would vote independent or sit out a Biden-Trump match-up, while 11.7% said the same for a Buttigieg-Trump match-up.

Vassar students diverged considerably from the national Democratic electorate when asked to name the quality they prioritize in a presidential candidate. While polls consistently show about 60% of Democrats naming electability as the top quality they look for in a candidate, just 8.4% of Vassar students said the same.

Instead, agreement on the issues ranked highest, with 48.3% naming it as their top priority. A “vision for the future” and “understands my problems” were picked by 17.3% and 9.5% of respondents respectively. 4.7% said experience, 4.5% said honestly and just 3.1% said strong leader are their top qualities.

On the issues, Vassar students were uniformly supportive of left-wing policy initiatives and disapproving of conservative policy initiatives, with a high degree of ambivalence towards centrist proposals like trade deals.

Legalization of marijuana, a wealth tax (like the 2% tax on net worths of $50 million or more proposed by Elizabeth Warren) and the Green New Deal climate, a progressive climate change proposal, all polled above 85% favorable. Three quarters of respondents had an unfavorable view of the death penalty and 93.6% had an unfavorable view of President Trump’s proposed wall on the Mexican border. More than half of respondents had no opinion on trade deals like TPP and NAFTA.

On health care, one of the most prominent issues in the 2020 campaign, Vassar students overwhelmingly back Medicare-for-All, the progressive health care proposal backed by Warren and Sanders which would replace private employer-backed health care with a single government plan. Two thirds of respondents said they support the proposal.

The next most popular proposal was the public option, a universal health care system proposed by more moderate Democrats like Pete Buttigieg which would create a government plan to compete with private insurers. 17% of respondents expressed support for that plan. 6% said they support fixes to Obamacare, while 6.7% had no opinion. Just 1.7% support the conservative proposal to repeal and replace Obamacare.

Other top issues included education at 22.9%, civil rights at 19.0%, immigration at 18.4% and the economy at 12.0%. Race relations, preserving the constitution, military, jobs, national debt and morality were named by under 10% of respondents.

More than three quarters of the sample said they’re paying a lot of attention or some attention to the presidential race, which is reading or hearing about it between 3 and 7 days a week. That’s up about 15% from September, when two thirds said they were paying some or a lot of attention.

With regards to where they get their information, like most young voters, Vassar students are disproportionately informed by tech. 52.7% said digital publications are their top source of election news, while about a quarter said social media is their go-to source. 12.2% said they get their news from newspapers, while under 5% named cable tv, network tv and word of mouth as their primary source.

A full breakdown of the results can be found here.