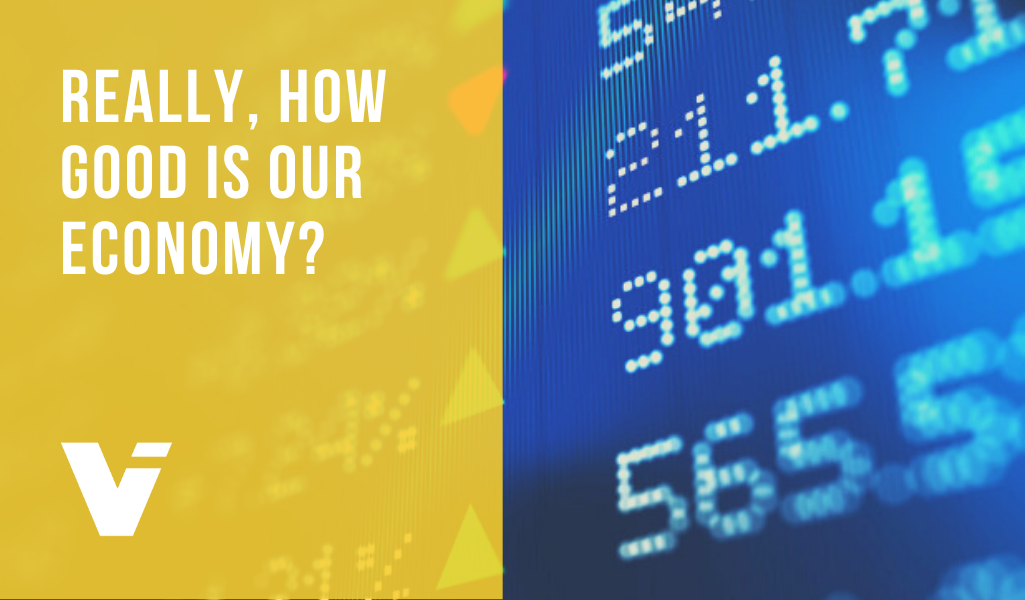 It’s common to hear politicians, businesspeople, and economists use words like “strong” and “good” when describing the state of the American economy. President Trump and other Republican officials often tout the economy’s ostensible strength as evidence that GOP leadership is beneficial to the well-being of everyday Americans. Usually, they’ll cite statistics about the record low unemployment rates and consistently positive GDP growth rate that have prevailed throughout the Trump presidency.

Meanwhile, Democrats commonly argue that statements about the economy’s supposed strength are misleading. They often point to statistics on the ever-present wage stagnation and decline in economic mobility that have plagued the American working class since the decline of labor unions.

Some also argue that the economic prospects of millions of American workers have been destroyed by automation, outsourcing, and trade, causing these workers to stop looking for jobs, which excludes them from official unemployment figures.

The first step to answering these questions is to examine what people actually mean when they call the economy “good” or “bad.” They might be making a comparative judgment about the economy, an absolute judgment, or both.

In the comparative sense, one can make a strong argument that the economy is either “good” or “bad.” The relative quality of the present-day economy will depend on both the historical period that we compare it to and the metric we use to make this comparison.

If we compare our current economy to the economy that existed during and immediately after the 2008-09 recession, then it’s quite strong. Just about every significant measure of economic well-being—poverty, unemployment, household net worth, etc—shows that the economy was a lot worse during the recession relative to today.

This is simply because the Great Recession was a downturn in the business cycle, while we are currently in an economic expansion. But if instead we compare the present-day economy to earlier decades, our current economy might look better or worse, depending on what metrics we use.

If we look at wage growth since 1979—adjusted for inflation via the Consumer Price Index (CPI)—wages have cumulatively grown a mere 3%, indicating that American workers haven’t become much better or worse off economically over time. But if we compare present-day CPI-adjusted wages to those in 1990, wages have cumulatively grown at over twice that rate, indicating that our present-day economy is relatively good for working people by historical standards.

However, wages don’t include benefits like paid leave, overtime pay, and employer-provided health insurance. To add these measures to the growth of wages themselves, we can use a metric called real compensation. And if we use an alternative inflation formula, called the PCE, then we find that real compensation has grown by a whopping 27.7% since 1972. This would indicate that the economy has drastically improved for workers over the past several decades.

But not everyone will agree that wages are the best measure of economic strength. If we use the poverty rate to evaluate the quality of the economy, then our economy is still doing relatively well compared to the past few decades. In 2018, the poverty rate was 11.8%, which is lower than it was during 27 of the last 29 years.

However, some other comparative metrics paint a much more pessimistic picture of our present-day economy.

For example, CPI-adjusted economic mobility appears to have actually declined over time (although some researchers find different results when they compute social mobility with a different measure of inflation). Decreasing economic mobility would mean that over the past several decades, it has become harder to achieve the so-called “American Dream” by climbing up the income ladder.

And of course, wealth inequality has generally been rising over the past several decades, creating a rallying cry for movements like Occupy Wall Street and Bernie Sanders’ Presidential campaigns. If one believes that economic equality is the best measure of a “good” economy, then the present-day economy looks pretty bad relative to previous eras.

If one talks about the “strong” economy and they mean it in the comparative sense, then you might agree if you think it is most meaningful to compare the present-day economy to the years following the 2008-09 recession. You might also agree if you think that low poverty rates, real compensation, or a low unemployment rate is the best measure of economic strength.

It’s clear that when using historical comparisons, our economy can be validly interpreted as either good or bad. But is our economy intrinsically “good” in the absolute sense? That is, is there something morally desirable or undesirable about the present status of the American economy?

This is a normative judgment that cannot be made through economic reasoning alone. What we call the “economy” is, essentially, the vastly complicated network of social structures through which all goods and services are distributed. Is this present-day distribution of goods and services intrinsically “good”?

For anyone who believes in any kind of economic justice or fairness, the answer would likely be an emphatic “No!”

Large swaths of the industrial Midwest have been economically decimated by the decline of the domestic manufacturing industry, while redlining and systemic racism have destroyed the economic well-being of many of the nation’s urban centers. Over half of Americans have delayed their own healthcare because they couldn’t afford medical expenses.

Furthermore, socioeconomic mobility in the United States is unfairly determined by where you grow up and is limited even further for people of color. And perhaps most importantly, 39.7 million Americans—more than the entire population of Texas—live in poverty. The present state of the American economy is clearly not morally desirable. Nor could it likely ever be, since winners and losers exist in any economic system.

Depending on the context, it might be more useful to think about the strength of the economy in a comparative sense or in an absolute, normative sense.

If you’re a presidential candidate who wants to fundamentally reshape parts of the American economy, it makes sense to talk about the normatively unjust aspects of the economy on the campaign trail. In this case, there’s nothing wrong with saying that the economy is “not working for the middle class” or “leaving behind working people.”

But if you’re a Federal Reserve economist whose mandate is to keep inflation in check and to keep unemployment low, it makes sense to talk about a “strong” economy because the economy is doing better than usual with respect to historical levels of inflation and unemployment.

A lot of disagreements over whether the economy is “good” seem to come from simple misunderstandings. Different people value different things when it comes to economic strength. For some people, socioeconomic mobility and wealth inequality are normatively more important than unemployment or the poverty rate, and vice versa.

At the same time, some conservatives cannot seem to accept that when progressives complain about the economy during an economic expansion, they’re usually referring to the normatively unjust nature of the current economy, which cannot be disproven by a low unemployment rate or high GDP growth.

Meanwhile, some progressives don’t seem to understand that it is not cold-hearted or factually incorrect to talk about a strong economy even when economic injustice exists, since most people who claim that the economy is “good” or “strong” are talking in a comparative sense.

In our economically unjust and unequal society, those with political and economic power bear a moral responsibility to make the economy work better for the majority of Americans. To best facilitate economic justice, voters, activists, economists, politicians, and even corporate executives should hold nuanced views on the economy that fully consider both economic data and moral convictions.

Vox – The truth about the Trump economy