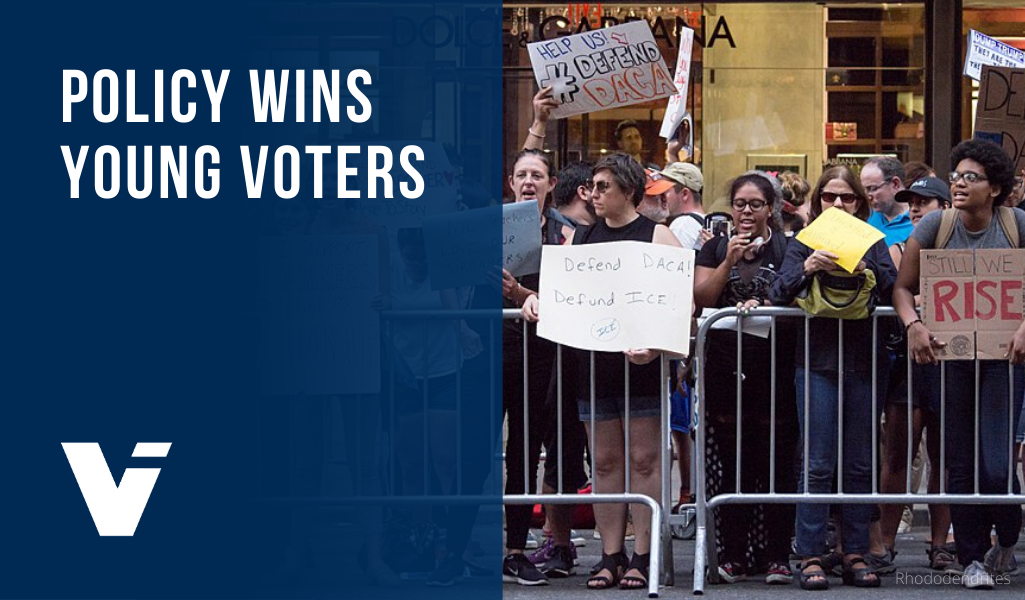 To keep the House in 2020, Democrats must energize young voters with substantive policy proposals.

Many Democratic Congress members first elected in the 2018 midterms are now facing a stiff fight for reelection. The “Blue Wave” of Democratic voter fervor that carried them into office two years ago by no means promises a sure seat for Democrats in the disproportionately suburban, white, swing districts they captured.

For these representatives, there are two possible campaign strategies: to attack Donald Trump’s personal failings, or to focus on critiquing Republican policies and advocating for Democratic alternatives. Although both approaches could benefit the campaigns of freshman Democratic representatives, the latter will be more effective because it welcomes desired voters, reduces the danger of media imbalance, and strengthens the public image contrast between Democrats and Republicans.

Focusing on Democratic policies on controversial issues can welcome vital young and minority voters into the party in a way that merely attacking Trump does not. This can be seen in the Democratic handling of immigration issues up through 2018.

As Trump and the Republican Party promoted harsh immigration restrictions and increased border security through extreme rhetoric that often featured racist stereotypes of Latin-American migrants, they alienated Latino voters. Democratic leaders escalated their advocacy of more sympathetic immigration policies in opposition to the Republican agenda, rejecting both Trump’s policy and his rhetoric.

Not only did this win approval from Latino voters, it boosted Democratic popularity among African-American, Asian-American, and moderate white voters who were put off by Donald Trump’s rhetoric. In this way, highlighting policy alternatives serves to attract voters by presenting the Democratic party as not only the lesser of two evils, but an actively welcoming organization.

Welcoming these young and minority voters is especially important as their share of the 2020 electorate is expected to be historically large. In 2018, new Democratic Congress members that rode the “Blue Wave” into Congress benefited from a surge in midterm turnout that was largely due to an unusually high turnout of voters planning to vote Democratic. To maintain this edge, Democratic candidates need the support of an energized core of Democratic voters. Criticizing Donald Trump is not enough; Democrats must reach out to the voters that Trump alienates and make it clear that they are supported by Democratic policies.

Another point in favor of concentrating on policy disagreements with a focus on Democratic alternatives is the need to right a media coverage imbalance that benefits Republicans. Historically, the most popular party in midterm elections also received the most media coverage prior to the election, but this trend was reversed in 2018. Although the Democratic party was decidedly more successful with voters, the Republican party did better at capturing media attention, both favorable and negative.

If Democratic candidates adopt a reactionary strategy, focusing on criticizing the failings of Donald Trump, they give his allies outsize public influence while sacrificing their own airtime. During the midterms, only 6% of Democratic candidates mentioned Donald Trump in ads, with most Democrats choosing to ignore Trump rather than even address him negatively. Even still, an Election Eve poll in 2018 found that of white voters in swing districts–an extremely valuable bloc for Trump–“57 percent… said Trump’s words and deeds made them angry.”

Pointing out that Donald Trump did or said something outrageous is no longer an effective way to shock and intrigue voters; even among white voters, who are more likely to vote Republican than members of ethnic minorities, 50 percent feel that “Trump and the Republicans… [use] toxic rhetoric to divide Americans.” As hard-pressed Democratic Congress members push towards reelection, they cannot afford to spend their valuable time in the spotlight redirecting attention back to Trump trying to prove a point that voters already agree with. Instead, Democrats are better served by drawing attention to issues that benefit them.

Finally, focusing on Democratic alternatives to Republican policies sharpens the tonal and substantive contrast between the public image of Democrats and Republicans. Now that impeachment proceedings have concluded with Trump’s acquittal in the Senate, Democratic party leadership is urging members to turn their attention away from the current president and instead emphasize party values.

The Trump Administration’s recently proposed budget features funding cuts to Medicaid, Medicare, Social Security, food stamps and federal student loans. Meanwhile, Nancy Pelosi is pressing Democrats to promote the “three-pronged ‘For the People’ agenda–creating jobs, cleaning up corruption in Washington and, above all, bringing down the high cost of health care.” This creates a clear contrast that is far more effective in garnering support than mere criticism of Trump’s priorities would be.

None of this is to say that criticizing the personal failings of Donald Trump is not a beneficial campaign strategy for new Democratic Congress members seeking reelection. Energized voters are more likely to turn out in large numbers, and lambasting the opposition can certainly energize voters. Considering that 89% of Democratic-identifying voters strongly disapprove of Donald Trump, attacking him is a reliable way to rile up supporters and drive them to the polls.

However, an entirely Trump-centric campaign will struggle to connect to key Democratic voters that are under attack by the current administration, will struggle to make their voice heard as they surrender narrative control to Republicans, and will fail to present much of an alternative to the vitriol-heavy, policy-light image of the Republican party that they claim to oppose.

Laurel ('23) is a prospective political science or chem major from Austin, TX. She works on the Vassar electrics crew at the Martel Theater. She enjoys theater, learning languages, and backpacking.