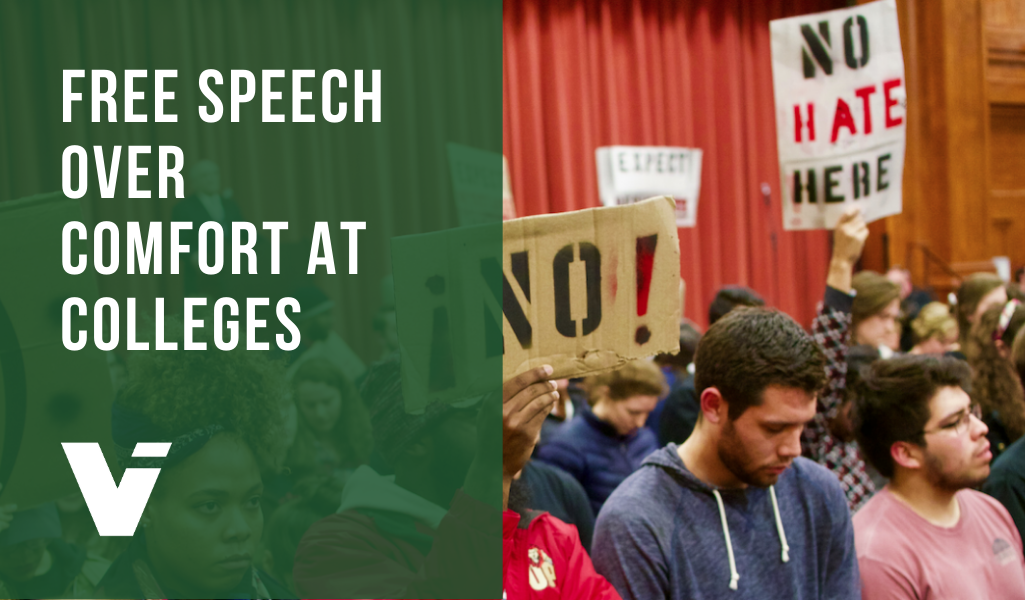 College students and administrators have made headlines in recent years for championing or criticizing the use of different types of speech on campus. One notable school, the University of Chicago, has made unambiguous statements in favor of free speech despite potential “discomfort”.

However, more schools, like Vassar College, have restricted campus speech to prevent “an intimidating, hostile, offensive, or abusive environment.” The ideological dichotomy separating these two institutions represents differing views regarding the role of higher education.

The University of Chicago’s view, embodied by its President Robert J. Zimmer in a Wall Street Journal op-ed is,  “Universities cannot be viewed as a sanctuary for comfort but rather as a crucible for confronting ideas and thereby learning to make informed judgments in complex environments.”

Vassar’s purpose, evident by the quote from their handbook, has to do with campus “environment,” a kind of safety. The two different perceptions of free speech, embodied by the University of Chicago and Vassar, essentially hinge on interpretations of “safety.”

The University of Chicago does not protect emotional safety for the same reason that our constitution does not; administrative protection of emotional safety is antithetical to free speech, and freedom of expression is a necessary condition for the pursuit of truth.

“The peculiar evil of silencing the expression of an opinion is, that it is robbing the human race; posterity as well as the existing generation; those who dissent from the opinion, still more than those who hold it. If the opinion is right, they are deprived of the opportunity of exchanging error for truth: if wrong, they lose, what is almost as great a benefit, the clearer perception and livelier impression of truth, produced by its collision with error”

It is my belief that seeking the truth is the purpose of higher education, and I would like it to be the purpose of Vassar, so that we can honor the inscription of veritas on the Thompson Memorial Library.

This graph, from Heterodox Academy, shows the current climate on college campuses in the context of controversial political issues. Interestingly, it isn’t just the campus conservatives that feel uncomfortable sharing their opinions, the problem is more widespread.

Roughly 60% of conservatives, 35% of liberals, and 50% of moderates feel reluctant sharing opinions on controversial topics in class. How can students learn about controversial topics, of which there are many, if they are reticent to speak honestly?

Less obviously, those students in the political minority tend to congregate, rarely engaging in discourse with students holding contrary views. For both groups of students, their ideas can be affirmed to potentially absurd conclusions.

Colleges have an obligation to society to create tomorrow’s thinkers and leades. That obligation cannot be fulfilled if there is not a commitment to free and open discussion and, by extension, the truth. Institutions of higher education cannot legislate emotionally safe spaces, while doggedly pursuing the truth.

“I’m not going to pave the jungle for you. Put on some boots, and learn how to deal with adversity. I’m not going to take all the weights out of the gym; that’s the whole point of the gym.” Jones goes further saying, “I want you to be offended every single day on this campus. I want you to be deeply aggrieved and offended and upset, and then to learn how to speak back. Because that is what we need from you in these communities.”

Universities must ask themselves whether they want to promote intellectual and emotional safety or to carry on the great academic tradition of seeking the truth. The world doesn’t need more young people who aren’t used to ideological criticism. Smart people unable to deal with criticism and engage with opposing views are often worse than useless.

Aidan Post ‘23 is a prospective philosophy and economics double major with an interest in politics from San Francisco.