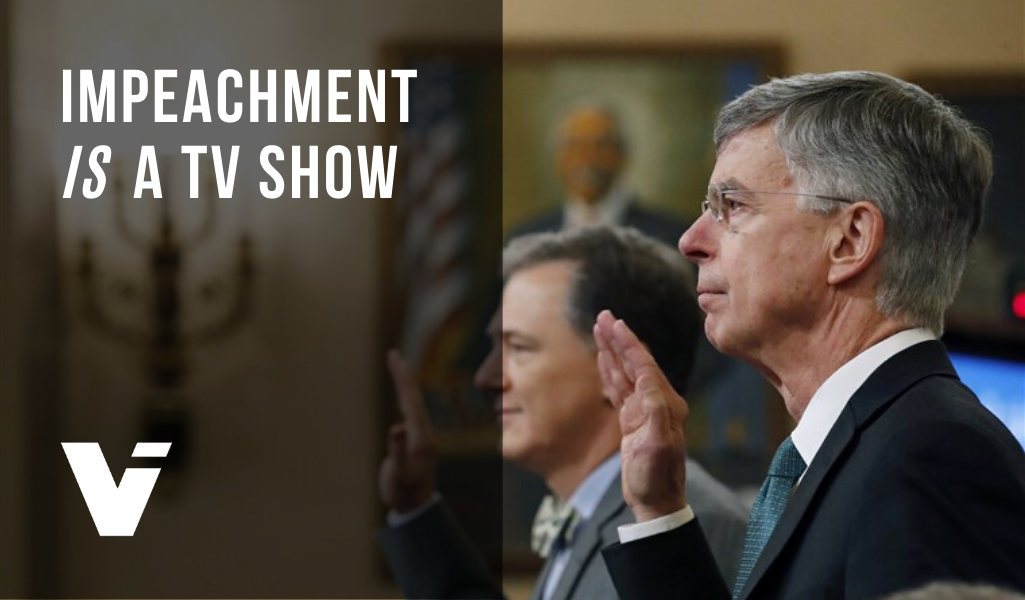 Journalists are right to treat impeachment as a spectacle

We’re just one day into a public portion of the impeachment inquiry into President Trump’s dealings with Ukraine, and already there have been so many bombshells that Washington DC feels like London during the blitz.

Among other shocking revelations and scathing criticisms, Ukrainian Ambassador William Taylor revealed details about a phone call between EU Ambassador Gordon Sondland and Trump which further solidifies the allegation that military aid was withheld from Ukraine in an effort to undermine presidential candidate Joe Biden. Taylor and State Department official George Kent both stressed that Trump’s actions are, in their view, unprecedented in the scale of their corruption and abuse of power.

But, damning though they may be, are these testimonies enough to persuade the public?

That’s the question at the center of numerous analyses of the hearing from top political reporters. An analysis by Jonathan Allen of NBC summed up the first day of the inquiry as, “it was substantive, but it wasn’t dramatic.” It lacked “pizazz,” he added. A Reuters analysis similarly referred to the inquiry as “consequential but dull.”

These pieces got ratioed to high heaven on Twitter: over 27,000 responses and counting compared to 2,600 likes for the NBC analysis, and nearly 10,000 replies to 800 likes for the Reuters piece.

A journalism professor at NYU tweeted that he dismissed a “major media reporter” asking him to “provide a quick comment about how the impeachment hearing today fared as a TV event and how you think the ratings will be.”

The primary criticism of these takes–mostly coming from the left–is that they are epitomic of the media’s perceived obsession with horse-race coverage, which treats politics as sports or theater. These critics contend that Allen and Reuters reporter Jeff Mason don’t give the substance of the inquiry–Trump’s misdeeds, Taylor’s opinion of the administration’s priorities, etc.–its due consideration.

One reply to NBC’s article reads “it is a strange world where the truth requires ‘pizzazz’ to be effective.” This, inadvertently, hits at the point of the analysis.

It is indeed a strange world we live in. A world where Donald Trump was elected because he was able to capture the collective attention of a nation through unprecedented antics, unvarnished streams of consciousness at debates and rallies and an overall ridiculous persona. Those characteristics, more than anything else, helped put a candidate with unprecedented unfavorable numbers in the White House

So it is worth bearing in mind what is actually relevant to voters when contextualizing the impact of the hearings. Substance is important, yes. But, cynical though it is, spectacle is more important.

First, the ultimate impact of this inquiry will not be decided by law or politics. For one, impeachment is not a legal process. No matter how many crimes Trump may have committed, it is the prerogative of our elected representatives, not judges or juries in a criminal trial, to determine whether he should be impeached and/or removed. That makes it technically a political process. But technically does a lot of heavy lifting here.

While the inquiry is nominally political, the politics don’t actually play a decisive role when all is said and done. The outcome of the eventual votes on impeachment and removal is a foregone conclusion. Trump will almost definitely be impeached by the Democratic-controlled House, and he will without question be acquitted by the Republican-controlled Senate. It is not possible that over a dozen Republicans will defect and vote with Democrats to remove a President from their own party. It just will not happen.

So what are we left with if we already know the political outcome? What is the point? The point is swing voters. What will they make of the inquiry? How will it sway their vote in 2020, if at all? If Trump will not be removed by constitutional means, Democrats will have to do it electorally.

And so we circle back to the original point: spectacle is crucial. Elections are political theater, and while Trump may not be the brightest bulb in the shed, he is a talented performer with a gift for capturing a national audience, despite, or perhaps because of, his many over-the-top scandals and his penchant for self-incrimination. That is what Democrats will have to compete with if they want to get him out of the White House.

Americans love salaciousness and sensationalism, and never more so than in the Trump era. Cable news ratings can always be relied on to soar when a wacky or shocking scandal is the lead story. Trump fills that demand better than any modern politician.

This showmanship, he argues, has fundamentally transformed politics. It’s made it harder for conventional politics to make news. For that impeachment, a dull impeachment hearing that lags on without spectacle will quickly lose the attention of both the media and the public. After that, what does it matter how many crimes Trump has committed? Nobody is listening–the testimonies have no effect.

To be clear, I have my own disagreements with the finer points of Allen and Mason’s pieces, but their theses and framing of impeachment are fundamentally correct. The substance, yes, is important, but how that substance is packaged, and whether or not it reaches the ultimate decision-makers, swing voters, is determinate of whether Trump will be in office come January 2021.

It may feel morally clean to approach this inquiry with a purely sober and substantive lens. But that whitewashes the grim reality of modern politics: that it is, at its core, theater. To ignore the role that “pizzazz” plays in all of this is to dismiss the only real impact this inquiry might have.