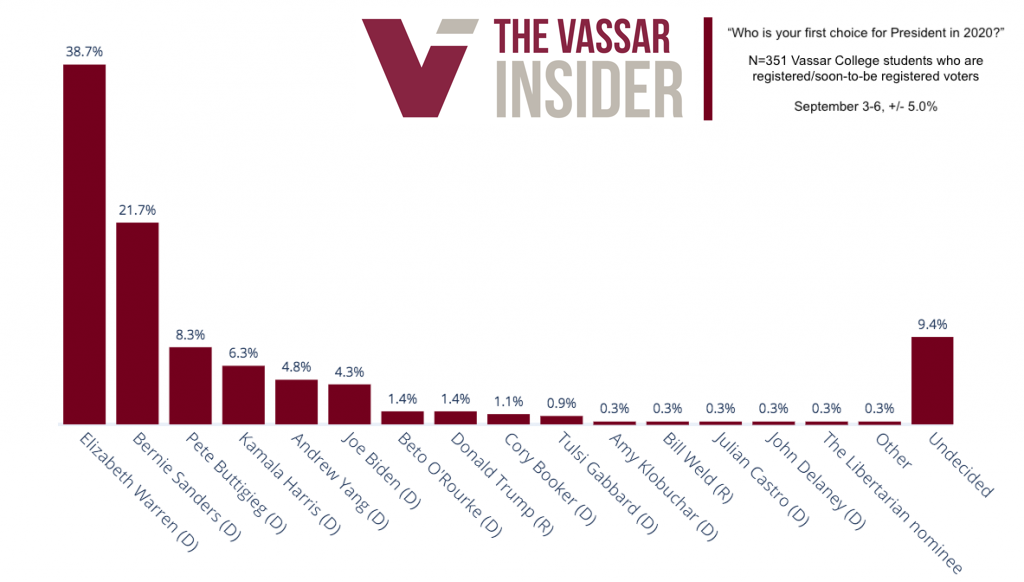 The Insider editors believe that, as one of the most politically active campuses in the country, Vassar’s voice in national politics deserves to be heard. That is why we conducted the Vassar Insider’s first 2020 election poll of the Vassar student body last week.

The poll, which was administered online through a google form, surveyed 351 Vassar students who are either currently registered to vote or will “definitely” or “probably” register between now and election day. It was conducted between September 3rd and 6th and has a margin of error of +/- 5%. Here are the results:

While Vassar was solidly Bernie Sanders country in the 2016 election, 2020’s much larger field of Democratic primary candidates has clearly fractured the Vermont Senator’s former base and elevated a new favorite: Massachusetts Senator Elizabeth Warren.

While a large majority–more than 60%–of Vassar students favors the two progressive candidates over more moderate candidates like former Vice President Joe Biden, California Senator Kamala Harris and South Bend Mayor Pete Buttigieg, Warren was the first choice of 38.7% while Sanders trailed at 21.7%.

The rest of the field languished in the single digits, a departure from national polls which typically show Biden, Sanders, Warren and Harris all at double digits, with Biden typically leading.

Pete Buttigieg was the first choice of 8.3% of respondents, while Kamala Harris was the favorite of 6.3%. Tech entrepreneur Andrew Yang, who has a cult following among tech and internet-savvy voters, had the support of 4.8%. Vice President Joe Biden, who currently leads in most national and early state polls, garnered just 4.3%.

The rest of the major candidates garnered no support.

What are the candidates’ coalitions?

Warren dominates among voters who identify as progressive or liberal, while Sanders just barely edges her out among self-identified democratic socialists. Sanders also sweeps up most of the small group of respondents who identify as communist. Moderates are split between most major candidates, but narrowly go for Yang, who also has the backing of a plurality of libertarians.

There is a considerable gender divide between Sanders and Warren. While Warren bests Sanders among female voters–who make up nearly 60 percent of the sample–by 29 points, Sanders beats her by 1 point among males. Warren also wins a plurality of voters who identify as non-binary, third gender or questioning.

Warren also bests Sanders among LGBTQ voters. A majority of LGBTQ respondents, 51%, support Warren, making it one of her key demographic groups. Sanders, by contrast, wins just 21% of LGBTQ voters. He performs stronger among straight voters, who back him by 23% to Warren's 31%.

Warren has the popularity, but AOC has the enthusiasm

Following closely behind is New York Representative Alexandria Ocasio Cortez, a 29-year-old democratic socialist who was elected to Congress from the Bronx in 2018. She has a margin of +71.8%. She’s followed by the Democratic Party which has a margin of +55.5 and Sanders with a +55.3% margin.

Harris, while in the middle of the Democratic pack in terms of approval, has second the highest unfavorable rating of any Democrat at 33.1%, putting her margin at +14.2%. That’s behind Buttigieg at +27.4 and House Speaker Nancy Pelosi at +18.6%, but ahead of Beto O’Rourke who has a margin of just +9.1%, the second-lowest of any Democrat polled. 40.7% also said they either have a neutral view, no opinion or have never heard of O’Rourke, making him the highest of any politician in that category.

Bringing up the rear in the Democratic pack is Joe Biden, who is the only Democrat in the poll with a negative favorability rating. Just 29.6% of voters said they view him favorably compared to 53.2% who view him unfavorably. That gives Biden a -23.6% favorability rating at Vassar.

All the Republicans–Donald Trump, Vice President Mike Pence, Senate Majority Leader Mitch Mcconnell and the Republican Party–polled extremely negatively. Mcconnell led the pack at -79.5%, followed by the Republican party -80.4%, Pence at -93.1%, and Trump at -94.3%, with a 96.6% unfavorability rating to just 2.3% favorability.

One point to note is that, while Warren has the highest margin, Ocasio-Cortez, who has a massive youth following thanks to her social media savvy and anti-establishment views, has the most enthusiasm. 59.9% said they found Ocasio-Cortez “very favorable” to 52.7% who said the same for Warren.

Perhaps President Ocasio-Cortez is on the horizon as Generation Z becomes a larger chunk of the voter pool.

What do Vassar students care about?

Finally, we asked respondents to list what they believe are the three most important issues in 2020. Issues of climate and the environment, health care, and inequality dominated.

Health care has been a signature debate in the Obama and Trump eras, and unsurprisingly it was huge on the list of priorities as well. 55.0% of respondents listed health care and another 2.8% listed medicare as important issues.

Immigration was a key issue for 29.3% of respondents, likely in response to the Trump administration’s policies of increased deportations, family separations and child detentions at the US-Mexico border. Another 23.4% listed income inequality and 21.4% listed civil rights. These three issues go hand in hand as they are all focused on the most marginalized members of society, something Vassar students are well known for caring deeply about.

The economy, which typically tops national policy priority polls, was listed by 18.5%, while education, another big one in national polls, came in at 16.0%. Race relations, morality, preserving the constitution, jobs, drug addiction, the budget deficit and many other issues were listed by less than 10% of respondents.

The Insider plans to do more of these polls throughout the year, so stay tuned.

See a full breakdown of the results and partial crosstabs here.