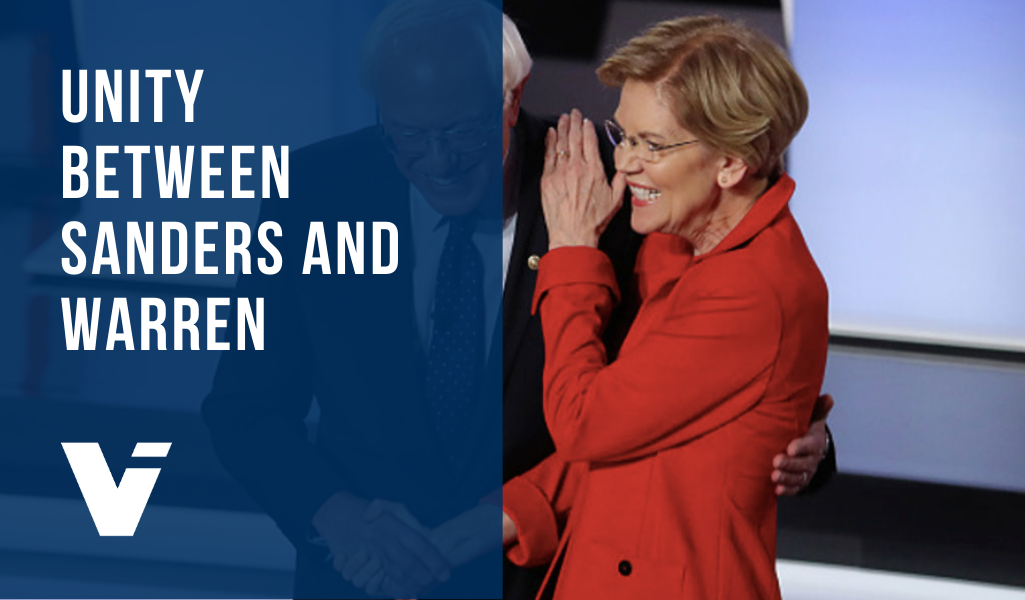 Progressives' best shot in 2020: unity between Sanders and Warren

The media narrative is clear: Bernie Sanders and Elizabeth Warren are on course to clash over who is the best leader to bring progressive change to America in 2020. And to onlookers of the Democratic primary, many of whom are still just marginally invested — this makes sense.

On the one hand you have Joe Biden, the frontrunner casting himself as the pragmatic moderate, who has built a loyal base of conservative, moderate, and establishment Democrats. He’s reportedly been assuring rich donors in secret that in a Biden presidency, “No one’s standard of living would change. Nothing would fundamentally change.”

On the other hand, you have Sanders and Warren, who have sworn off big-money fundraisers and tout their ability to generate grassroots funding. Their visions stand in stark contrast to that offered by Biden: as Sanders has called for a “political revolution” since 2016 and Warren frequently uses the phrase “big structural change,” at her rallies.

Progressives argue that a Sanders or Warren administration would take America a step further than a Biden administration, offering bold solutions to three major issues plaguing America in the 21st century: historic levels of income inequality, a harrowing outlook on climate change, and a stifling of democracy.

Many Democratic voters admire Sanders’ unabashed refusal to back down on his plans to guarantee health care and free college tuition to every American, while simultaneously eliminating private health insurance and wiping clean student debt – two proposals that centrist Democrats don’t support.

Warren has faced similar opposition for her plan to fund universal childcare, K-16 education (including vocational school), and eliminate 95% of student debt by instituting a wealth tax of two cents per dollar on American fortunes over 50 million dollars. Nevertheless, her plan is gaining momentum amongst Democratic voters: recent crowds at the New Hampshire Democratic Convention and Washington Square Park both enthusiastically chanted “two cents” in response to Warren’s explanation of the plan.

Both Sanders and Warren offer robust plans to transform the American economy to work better for the 99%. But the fact that Sanders and Warren are the two most progressive frontrunners does not necessarily mean that they are competing for the same voters. In fact, the data tells us they are not.

One of the obvious signs that Sanders and Warren have vastly different bases of support comes from polling that considers voters’ second choices. If Sanders and Warren were truly competing for voters, you would expect to see that Warren supporters strongly prefer Sanders as their number one alternative and vice versa.

But, as suggested by the most recent Morning Consult Democratic Primary Tracking poll, the number two pick for Sanders supporters is Joe Biden, which is ironic if you consider the media’s framing of Biden as “the moderate” and Sanders as “the progressive.” And although 23% of Warren supporters name Sanders as their number two pick, more than 7 in 10 of her supporters do not. Instead they name Joe Biden, Kamala Harris, and Pete Buttigieg.

Nevertheless, their ability to draw different support outside of self-identified progressives is an encouragement for progressives who hope Sanders, Warren, or both are on the Democratic ticket in 2020. So if Sanders and Warren aren’t competing for the same voters, what is the current make-up of the two most progressive 2020 Democratic presidential candidates’ coalitions?

One source of insight into this question is provided by a recently published New York Times article that shows a map of grassroots enthusiasm as measured by small-dollar donations. At first glance, the map provides a strong visualization of Sanders’ fundraising dominance. If you eliminate Sanders from the map, you can see that Warren is the next best fundraiser for the majority of the country.

One of the greatest insights to be gained by studying this map more closely is that Warren tends to dominate over Sanders particularly in wealthier communities and suburbs. And many of these communities support someone like Harris or Buttigieg over Sanders as their second choice. In sum, this map paints a picture of a stark divide in support for Sanders or Warren based on class.

Sanders does better at fundraising from working class Americans, while Warren takes over with the middle class and affluent Americans. This is unsurprising given the nuance in messaging from these candidates (“revolution” versus “structural change”) and the difference in how these candidates identify (“democratic socialist” versus “a capitalist to my bones”).

Another stark difference between the Sanders and Warren coalitions is their racial makeup. In 2016, a large part of the media narrative was that Sanders polls poorly with people of color. This narrative continues to be told by many establishment political pundits, but it actually isn’t true: polls from this election cycle–including the most recent polls–actually suggest that of the three front runners, Sanders has the most diverse coalition of voters.

For example, the most recent Survey USA survey of over 1,000 Democratic primary voters showed that Warren is the first-choice for 24% of white Democratic voters while Sanders only gets about 13% of the white vote.

This trend nearly reverses among black voters, 23% of whom support Sanders and 10% of whom support Warren (for reference, Biden leads with more than 40% of black voters). However, Sanders leads among Hispanic voters with 25% of the vote compared to only 12% for Warren.

This survey also revealed some other interesting insights into the Sanders and Warren coalitions. For example, Sanders has a slight edge among male voters (20% to 14%) and Warren has a slight edge among female voters (21% to 16%). In terms of educational background, Sanders more than doubles Warren’s support amongst those with a high school diploma (23% to 10%) while Warren has a healthy lead among college-educated voters (22% to 14%).

The most striking differences between the Sanders and Warren coalitions as suggested by this survey come down to political ideology and age. In terms of ideology, supporters of Sanders support resembles an upside down bell curve with most of his support coming from very liberal (38%) and conservative (27%) Democratic voters. Moderate and liberal voters make up 17.5% each of his coalition in this survey.

Finally, there is a generational divide between Sanders’ and Warren’s bases. Sanders garners the enthusiasm of young voters aged 18 to 34, doubling Warren’s support (33% to 16.5%). While Sanders and Warren have similar support from voters aged 34 to 65, Warren triples Sanders’ support among voters above 65 with 21% of the vote. The margin of error for these statistics is 3.4%.

It is worth noting that these demographic differences are a snapshot in time and may fluctuate in the coming months, particularly in Warren’s case, as almost 1 in 5 voters has no opinion of her or has never heard of her.

So what does all of this mean for progressivism and the 2020 election?

The fact that Sanders and Warren are both generating support from different coalitions is an encouraging sign for those supporting their common goal to vastly restructure the American economy into one that works for all Americans and not just a handful of Americans. Together they total a strong plurality of Democratic voters, which is likely to be even higher when other progressive and populist candidates like Tulsi Gabbard and Andrew Yang drop out of the race. And with an invigorated Democratic base, if Sanders or Warren win the nomination, then progressives would have a strong chance to win the White House.

This opportunity relies on the ability to effectively merge two coalitions without succumbing to the messaging of the corporate and media establishment: that Sanders and Warren must clash. It is true that there are important distinctions to be made between Sanders and Warren. Some Sanders supporters, for example, are calling for Sanders to attack Warren for being too close to the political establishment.

But despite these distinctions, it is critical for progressives that a rivalry doesn’t emerge between their coalitions, as this might scathe the other’s chance of success in the primary or general election. So far, Sanders and Warren seem to be following this playbook: especially at the second Democratic debate where they stood together and fended off attacks from more moderate Democrats.

In the end, it is not possible for both Sanders and Warren to win the Democratic party’s presidential candidacy. But if progressives want to be sure a progressive is nominated over more moderate front-runner Biden in a two-way race scenario, Sanders would strongly benefit from bringing Warren voters into his coalition and vice versa.

A clear endorsement by Sanders or Warren of each other over Biden is one path to achieve the goal of coalition unification. A strong backing might be enough to sway the 26-30% of Sanders and Warren supporters who name Biden as their second pick. But even if it doesn’t sway these voters completely, it’s likely that such an endorsement would be strong enough to sway Sanders and Warren supporters who don’t name the other candidate or Biden as their number two pick.

These voters total half of Sanders’ and Warren’s coalitions and support candidates outside of the top three–like Harris, Buttigieg, and Yang–as their second choice. If the race plays out without any surprises, these lower-tier candidates will likely drop out after the first few caucuses and primaries. And in the event that Sanders or Warren drop out later–the finalist will likely have a strong influence over this larger pool of second choice voters.

On the other hand, a more direct and potentially more effective method to merge the Sanders and Warren coalitions would be the announcement of Sanders or Warren as running mate to the other if Biden leads after Super Tuesday. In this scenario, a clear display of unity between Sanders and Warren might be strong enough to give the remaining progressive candidate an edge over Biden.

It is also possible that in the months to come, Sanders or Warren will grow their coalitions to be strong enough to win a plurality of votes in the Democratic presidential primary. Even then, the two progressives would be smart to display unity, as this would be helpful going into the general election.

With the Iowa caucuses still more than three months away, there is still plenty of time for shake-ups before the Democratic presidential primary. It’s too soon to predict how the nomination process and election will play out, but at least one thing is clear: a unification of the Sanders and Warren coalitions may be the best shot for progressives to take the White House in 2020.

Bernie Sanders Has a Problem. Her Name is Elizabeth Warren.

Detailed Maps of the Donors Powering the 2020 Democratic Campaigns

Sanders and Warren Transform How Presidential Campaigns are Paid For

James Bonanno ‘20 is majoring in neuroscience and cognitive science. He has interests in American politics and international relations.