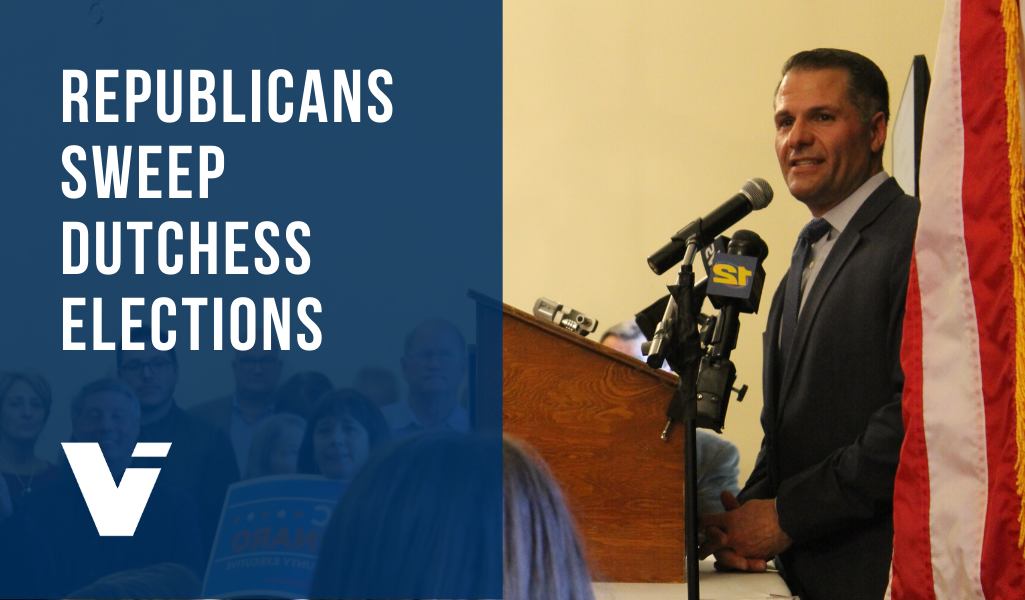 County Executive Marc Molinaro won re-election by a whopping 17 point margin, while the county legislature remained in Republican control. In fact, Republicans picked up at least one seat.

Republicans also held on in races for County Clerk, County Sheriff and District Attorney. The latter race was particularly contentious, with 9-term incumbent William Grady besting his Democratic challenger by just over a point.

“Anything more than one vote is a landslide as far as I’m concerned,” joked the 73-year-old Grady in his victory speech.

Mayoral elections were more of a mixed bag for Republicans.

In the rapidly-transforming community of Beacon, however, Republican incumbent Randy Casale lost his re-election bid by nearly 20 points to Democratic challenger Lee Kyriacou.

In declaring victory, Molinaro, Rolison and other Republicans were quick to tout their inclusivity, public service and common sense governance.

“This county has defined itself as one that cares deeply about the people it serves,” Molinaro said of his leadership, “we’ve invested in mental health, drug addiction, and most importantly we are an example across this country, showing Americans what it means to think differently, to lift people up regardless of ability.”

Rolison echoed these sentiments in his victory speech, while lamenting the politicization of government.

“I’m here to tell you tonight that the politics of division has to stop,” he said, “leaders are supposed to unite a community, and that’s what we are doing here in the City of Poughkeepsie.”

Molinaro told the VPR that he’s “grateful for the challenge and competition” posed by his Democratic rival, former New York Bridge Authority executive director of the Joe Ruggiero.

“I believe in the value of public service,” Molinaro said, “and I know that everyone regardless of ideology, where they come from, who they love, to whom they pray, deserves a government that respects them.”

“We work every day to ensure that this county government embraces our differences and respects the people that live here,” he added.

Molinaro’s win, which was expected but not guaranteed, serves as a respite for Republicans in what has shaped up to be a tough night for them.