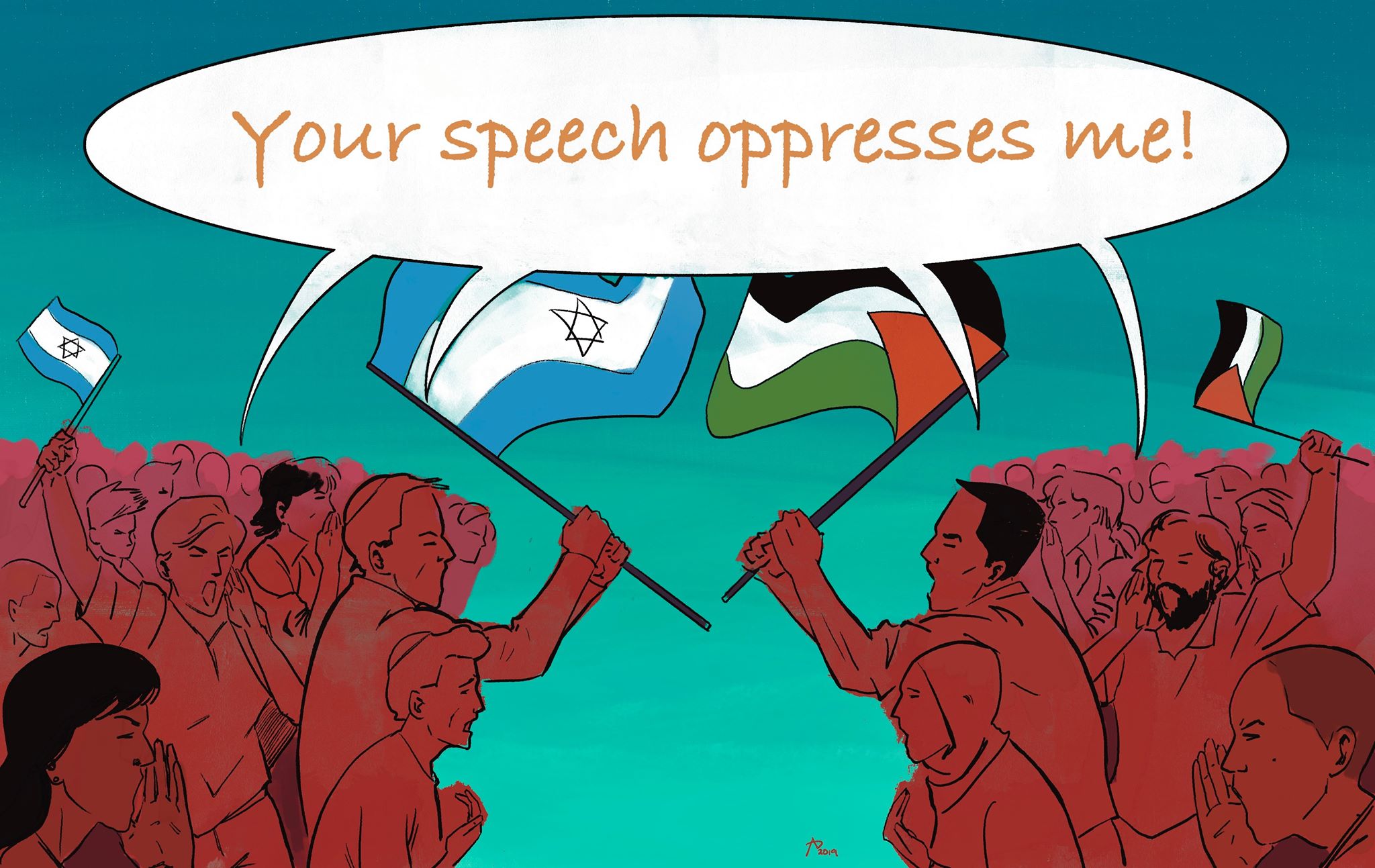 How do you have a functioning community, split down the middle, where one group’s liberal democracy is another group’s apartheid state? The simple answer: you ignore the issue. And Vassar had been ignoring it so well for a few years. Until now.

A lecture by pro-Israel activist Hen Mazzig, and the disruption of the event by pro-Palestinian protesters, has plunged the campus back into a heated debate over the Israel-Palestine conflict. The high tensions sparked by this event are reminiscent of the cacophony of the Boycott Divestment Sanctions referendum in 2016.

On the morning of the talk, Vassar’s Students for Justice in Palestine (SJP) chapter posted a statement to their facebook page that claimed Mazzig uses his identity as a gay Mizrahi Jew to “glorify Israel and attack anyone who advocates for Palestinian liberation” before launching into a scathing criticism of Mazzig’s service in the Israeli Defense Force and his Israel advocacy.

The group said they “reject Mazzig’s presence on this campus” and asserted “there is no two-sided conversation to be had when one party’s existence is predicated upon the forced dispossession, massacre, and total control of movement and access to resources of the other.”

The controversy now gripping Vassar — and attracting the attention of outside commentators and activists — centers on a chant. “From the river to the sea, Palestine will be free,” the SJP disrupters shouted at Mazzig as he attempted to discuss his family’s experience with ethnic cleansing.

As he was being drowned out by the protesters, Mazzig stated, “this chant… basically means my family should be killed.”

But SJP activists are not prepared to concede any ground on that point.

In a statement following the event, SJP contended with the allegation, put forth by Mazzig and others, that the chant is a Hamas slogan calling for genocide of Israeli Jews. “This is untrue and demonstrates how Zionists are eager to discredit critics of Israel as ‘Hamas terrorists,’” they argued, “The phrase is a popular slogan among a wide range of Palestinian resistance and nationalist groups.”

“I don’t think that it really means expelling Jews from Palestine,” said Ezra Mead ‘21, an SJP member who did not attend the protest. “It just means that all people can live free from military occupation.”

Mead noted that Likud, Israeli Prime Minister Benjamin Netanyahu’s Zionist political party, advocates for Israeli sovereignty from the Jordan to the Mediterranean. “I think it’s fair that anti-Zionists groups can use the phrase too,” he said.

But Israel advocates on campus believe the chant cannot be uncoupled with its usage by Hamas and its connotations with Israeli genocide.

“When framing intent it’s important to look at the origin and the context in which it was given,” argued Jamelia Watson ‘20, Vassar’s AIPAC liaison, “the reason [the chant] is accredited to Hamas is because it’s used as recipe for political mobilization and militant resistance.” She argued that using a chant adopted by a terrorist organization “reinforces their behavior.”

Mazzig pointed out to the Insider that “according to the International Holocaust Remembrance Alliance and the State Department's working definition of anti-Semitism, the call was explicitly anti-Semitic.”

This was somewhat echoed in statements by both VOICE and President Elizabeth Bradley, albeit with a lighter touch.

“The words have been associated by some people with anti-Semitism,” Bradley wrote on the morning following the event. VOICE noted that “84 percent of American Jews believe the statement ‘Israel has no right to exist’ is anti-Semitic,” and asked that SJP members “at the very minimum, think about this idea.”

Bradley’s statement instead took sharper aim at the form in which the protestors expressed their dissent.

“Disrupting an invited speaker is antithetical to being a part of a learning community,” she wrote, “we have protocols that allow for peaceful protest. At the core of these protocols is our unwavering belief that we cannot have a free exchange of ideas if we do not allow diverse perspectives to be heard. Students today knowingly violated those protocols, which is unacceptable.” She added, “we will follow our internal processes to address the situation.”

Speaking on the condition of anonymity, one SJP member who participated in the protest argues that the statement mischaracterizes the group’s actions. “We did ‘disrupt’ by being loud, but we never entered the lecture space,” they said, “and we didn’t keep anybody from going in and didn’t even have contact with the people who went in.”

They also dismissed charges of anti-Semitism, pointing out that many of the leaders of SJP are members of the Jewish Voice for Peace. “I think people involved in SJP, many of whom are Jews, have been unfairly maligned,” they said.

But some on the other side have also condemned Bradley’s statement for not being forceful enough against the protestors.

“I just think that instead of wavering and saying it 'might have' been anti-Semitic, it should have been a strong condemnation of that kind of language,” said Livia Bartels ‘20. She added that she would like to see more outreach to Jewish students and programming to counter anti-Semitism.

“There's a way to protest Israel and be unhappy with Israel as a state without translating it to all Jews suck and should die,” she said of the protest.

Mazzig expressed similar sentiments, arguing that the statement is “weak and missing the point” and that it takes an “‘all lives matter’ approach that ignores the real victims here.” He said the statement failed to acknowledge the “true motivation of the protestors: anti-Semitism.”

“I am a vocal critic of the current Israeli government and some of its policies,” Mazzig added, “the International Holocaust Remembrance Alliance wrote guidelines to help people criticize Israeli policies without being anti-Semitic. It is simple and anyone can and should do it.”

Bradley told the Insider that she stands by her statement in spite of the criticism.

In their statement, VOICE supported President Bradley’s response and asked the college and the VSA to “take appropriate measures in ensuring that this type of action against discourse does not happen again” by mandating that the protesters attend a workshop on anti-Semitism.

VOICE co-founder Jake Miller noted that they are not a pro-Israel group countering SJP, but rather, as the name suggests, a group aimed at creating an effective dialogue about the Israel/Palestine conflict.

But President Bradley seems somewhat pessimistic about the dilemma presented by the seemingly irreconcilable differences between the two sides of this debate.

“This is, in fact, one of the most difficult and important questions of our time,” Bradley said when asked how one can uphold free speech when both sides view the other’s speech as inherently oppressive.

“We aspire to foster a community in which diverse–even vehemently opposing–viewpoints are heard, and while we continue to struggle, we are committed to the work required to continuously move closer to this aspiration.”

Bradley called the event a “teachable moment” that “allows us to reflect on our community in all its diversity.”

She concluded, “we are working to create an environment where the friction that inevitably emerges from different viewpoints can be channeled into deeper, more humane understanding of ourselves and each other.”

Update: President Bradley released another statement on Monday calling protest "unacceptable" because it disrupted the speaker and because "protestors chose a chant that can be understood to be calling for the eradication of the State of Israel and is highly intimidating to Israelis and Jews." She said that the college has have begun its adjudication processes against the students involved, adding "on this campus, we do not tolerate anti-Semitism, hate speech or discrimination of any kind."

Update: SJP released a statement on Tuesday in response to Bradley's second statement, which reported that "two members of SJP, singled out as leaders despite our org being non-hierarchical, were given official notice that they are facing student conduct charges for 'Failing to Comply' and 'Disruptive Conduct.'" The statement asked supporters to "stand against Vassar administration’s harmful accusations of hate speech and disciplinary retaliation against student organizers" by signing a pledge to help them "assert our right to peacefully protest on our campus and demand that our administration drop all charges."