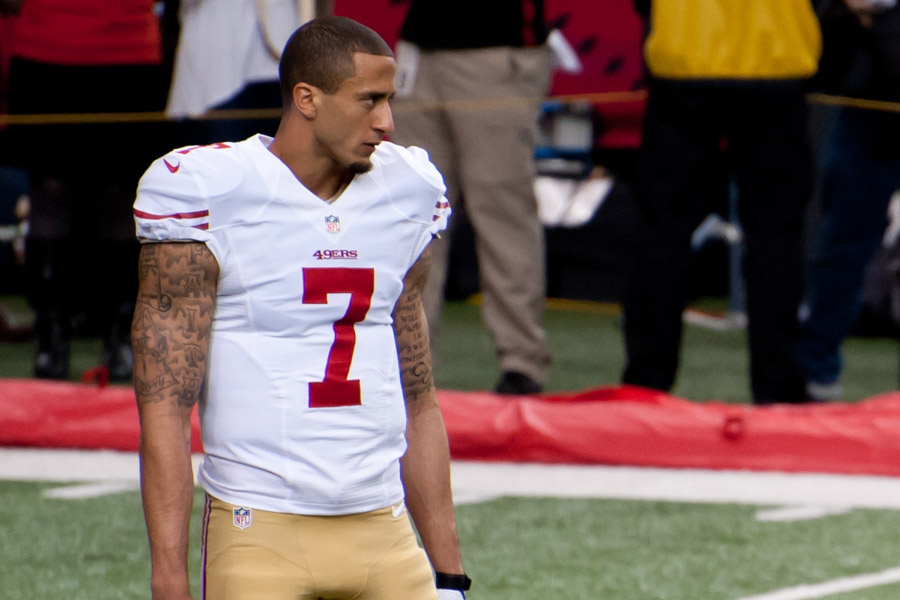 Even if you aren’t a football fan, you’re most likely familiar with the name Colin Kaepernick. The former San Francisco 49ers quarterback-turned-activist was blacklisted from the NFL in 2017 after he began kneeling during the national anthem to protest police brutality.

He gave his explanation for why he was kneeling in an interview: "I am not going to stand up to show pride in a flag for a country that oppresses black people and people of color. To me, this is bigger than football and it would be selfish on my part to look the other way. There are bodies in the street and people getting paid leave and getting away with murder."

In response to his courage, President Trump insisted the National Football League simply fire any player who kneels during the national anthem. “That's a total disrespect of everything that we stand for”, the President stated, making it clear that he would rather stand for a history of racism and white supremacy than admit that America, a nation founded on the blood and enslavement of black people, might not be perfect. Kaepernick, while praised and awarded for his activism by some, remains unsigned and the NFL untouched.

Fast forward to Superbowl LIII.  The game was hosted in my birthplace of Atlanta, a city with tremendous civil rights history. In a showy attempt to recognize this history, the NFL invited former mayor of Atlanta Andrew Young, and Bernice King, daughter of Martin Luther King Jr., to the coin toss. The inclusion of prominent black leaders, as well as kicking off the game with a clip of a speech by MLK, could be seen as an attempt by the NFL to show how they care about racial equality. That’s if you’re being naively generous with your interpretation–and I’m not.

Brands have a long history of appropriating class consciousness and radical movements in order to turn a profit. Take Pride Month of 2018 for example: in years past, companies would never risk making a public statement supporting LGBTQ rights, yet now that being queer is less taboo, brands were scrambling to make their products rainbow. With everything from pride flags in shop windows to McDonald’s rainbow french fry containers, companies competed for who could be the most ‘woke’. Yet in most cases, the sale of rainbow merchandise did nothing to help queer communities. Adidas, for instance, created a pride pack section in June, yet sponsored the 2018 World Cup in Russia, a country with extremely homophobic laws that threaten the lives and safety of their queer citizens.

While the NFL may be trying to align itself with the current social justice movement, fans are not quick to forget the events of 2017. One man tweeted during the game, “How you gonna have an MLK callout for a league which has blackballed a player for protesting police oppression?” The advertisement seems like an attempt, and a rather weak one, to placate black athletes who feel as though the league doesn’t care about police brutality and racial violence. The industry might be tired of taking heat over Kaepernick’s treatment, but the viewing public is tired of seeing big corporations appeal to the liberal social conscience as a money gimmick while simultaneously doing nothing to address the very real issues that affect people of color and other less privileged groups on a daily basis. What they’re selling us is nothing more than the idea of solidarity. When it comes to making amends for Kaepernick, the NFL has dropped the ball.

The Undefeated - Kaepernick is asking for justice, not peace

Forbes - The Heart Of The NFL's National Anthem Problem