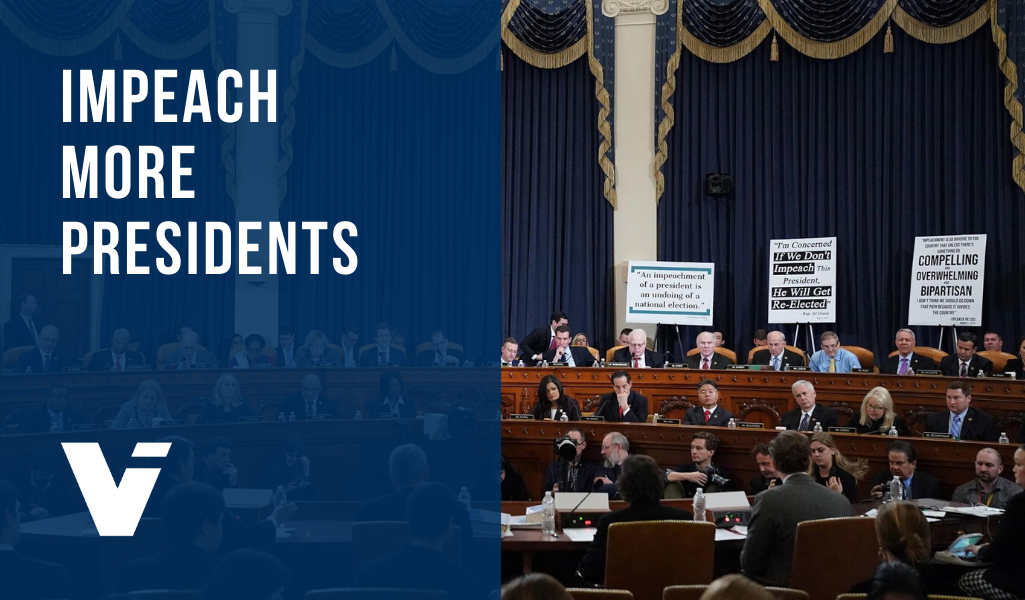 The Ghost of Impeachment Yet-to-Come

As the House Judiciary Committee passes the Articles of Impeachment against President Trump along partisan lines, his near future is certain. The House will impeach Trump before Christmas, and the Senate will acquit. Both votes will be along partisan lines.

Already, the predictable words of caution from conservative monarchists have arrived. In National Review, Andrew McCarthy writes, “we are exactly where the Framers hoped we would never be when they added the impeachment clauses to the Constitution: in a governing system in which impeachment has been trivialized into a partisan weapon for straitjacketing the incumbent administration.” He says Democrats should care because if every president is impeached from now on, they will be at the other end with their next incumbent.

So much political investment has gone into the presidency lately. For Republicans, it’s “give me Trump or give me death!” And most Democrats plan on voting for their presidential candidate based on domestic policy proposals alone. This neglects the fact that, unless the president uses executive orders, domestic policies first need congressional approval, and there is no guarantee Congress will be on their side. It’s as though voters and pundits believe the president can (and should) do anything they put their mind to. Even Democrats, it seems, want a monarch in their own image.

Impeachment should not be saved for only the most egregious cases. Hopefully, Democrats’ next winning candidate will also face impeachment investigations–and maybe even impeachment down partisan lines.

Every president in memory has committed major abuses of power but faced little political challenge. For example, despite his rhetoric, President Obama failed to prosecute those responsible for torturing Guantanamo detainees and left the prison in commission; he upped the use of aerial drones in Afghanistan, Iraq, Syria, Yemen, and Somalia, killing hundreds of civilians without even Congressional approval; and he expanded the government's online invasions of privacy–all while lying. For President Bush (Jr. and Sr.), there’s a long list of war crimes–and similarly for Clinton–all have in committed while lying to the American people. However, almost every president has gotten off scot-free.

This is not to say that bad policy should be an impeachable offense. It’s that impeachment investigations should be a tool to reign in the power of the presidency. Normal Congressional investigations are clearly not enough. The threat of self-incrimination can make the difference.

Let’s be honest, impeachment is rarely apolitical. Only President Nixon’s  impeachment was actually bipartisan. Politically motivated impeachment investigations can’t be stopped. But this isn’t necessarily a bad thing. Impeachment investigations–even without impeachment–could manage to bring more transparency to the office, or even prevent misdeeds in the first place. Lying isn’t so easy with Congress on your back and the American people waiting for any hesitation. Transparency, not “good policies,” would prevail.

To pretend that–even for the sake of political pragmatism–any president is above impeachment investigations is to endorse a narrative that there is such a thing as a “permissible” use of executive power. The role of the president is fluid. Promises are difficult to deliver on when the world order is shifting as rapidly as it is and the future is so unpredictable. No president’s behavior has ever been confined to the boundaries laid out in their campaign. No amount of experience can prepare someone for the role. Because of the nature of the office, decisions take place in a black-box. Character matters.

But just because a president was elected does not give them the right to make decisions in a black-box. Election is not an endorsement of character, and we should stop pretending it is.

A president should not have free-reign so long as their behavior is not “egregious.” If we are to care about our freedoms, we should hesitate to legitimize the monarchical extralegal power the president has.

Every president should yearn for transparency. This, of course, can never happen. Perfect transparency exists only in direct democracy. We don’t have a direct democracy, and executive duties are, by nature, too wide-ranging to divert to referendum. But impeachment investigations all around seems the closest we can get to perfect transparency. No president will investigate themself. Too many presidents have gotten away with lying to the American people. Maybe a threat of impeachment will provide a bit more oversight and reign in their power.

Adam (’22) is the Senior Politics Editor. He is a Political Science major with a Mathematics correlate. He is the President of the Vassar Post-Pasteurization Alliance and is also involved in the Vassar Debate Society. He is originally from Boston and enjoys watching films, reading, and hiking.