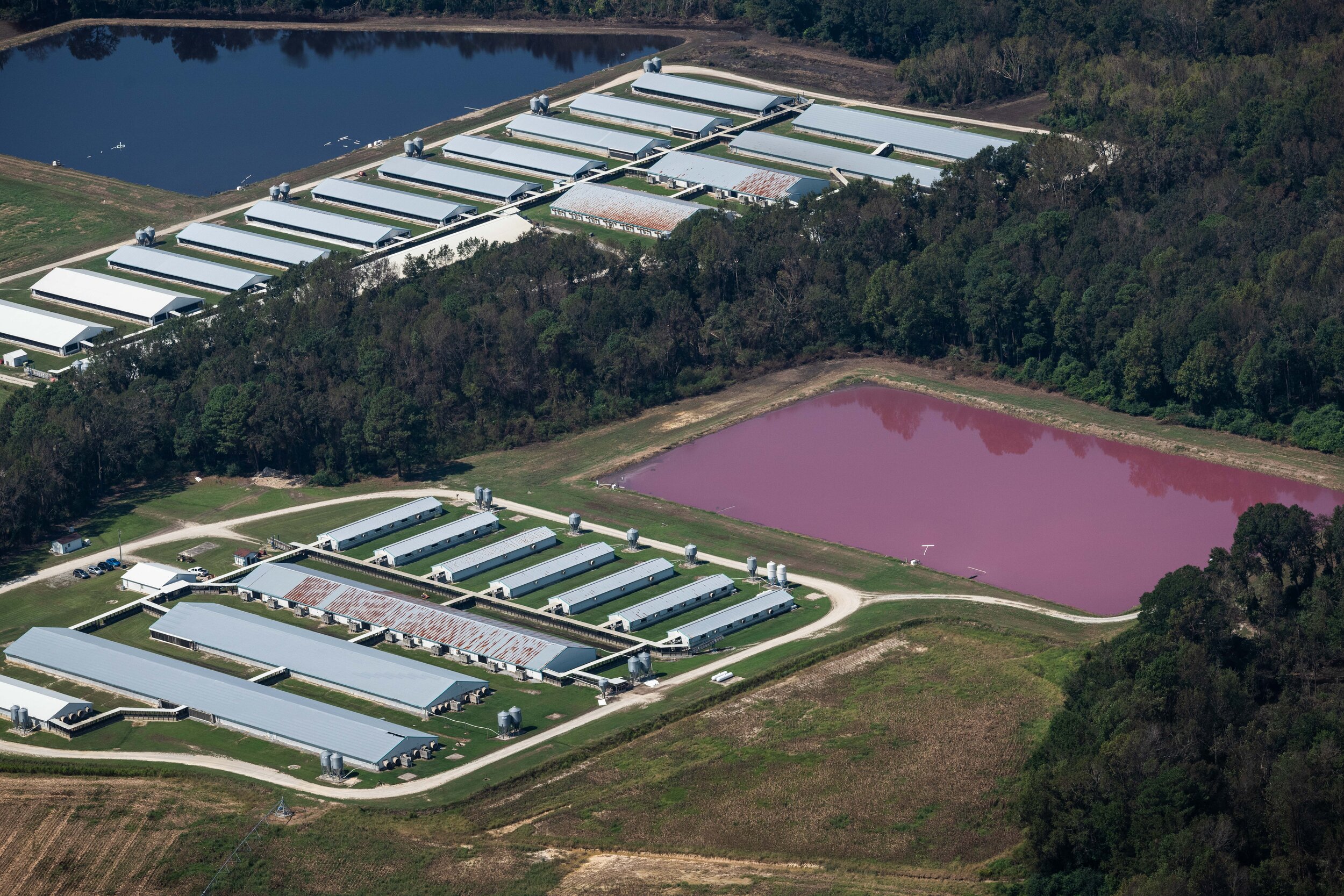 Managing Editor Adam Abadi ('22) begins his comprehensive look at the factory farming industry with an explanation of its brutal operation.

Humanity has unleashed a monster. The monster is unfathomably huge in scale and impossible to fully comprehend. It may appear unstoppable, growing by the day and governed by invisible, nebulous forces that no one individual can fully discern or control. The monster does not have a singular conscience; instead, it is sustained by the cumulative rituals of many, often carried out by those who are unaware of—or unwilling to accept—its very existence.

It seethes with death and destruction to an extent never before seen in human history. It screams in the language of steel and blood, and it feeds on the bodies of millions of tortured souls. It was born over the course of decades, gradually emerging from an unholy concoction of technological and economic forces that grew far beyond their architects’ intent or control.

It feeds on vanity, hedonism, tradition, and propaganda.

The monster is factory farming.

Vertebrate animals, certainly including cows, pigs, chickens, and likely including fish, are known to be conscious, sentient individuals. That is the scientific consensus, just as there is a consensus that vaccines protect us from viruses and that human activity causes climate change.

Factory farming, also known as intensive animal farming, is the dominant form of animal agriculture in North America and Europe. In a factory farm, hundreds or thousands of animals are enclosed in crowded indoor spaces, often packed into cages or stalls so small that they can barely turn around.

Factory farmed animals live grossly unnatural lives filled with immense amounts of pain and suffering. This pain and suffering has little in common with the natural suffering experienced by animals in the wild. Instead, it occurs as the outcome of artificial conditions carefully designed to maximize the profits and growth of agricultural companies. It is suffering driven by a confluence of technological advances, gratuitous agricultural subsidies, consumer demand, and the indifference of policymakers.

In nature, wild pigs express a range of behaviors such as grazing, foraging, nesting, and socializing. They are generally considered to be smarter than dogs and use a complex system of vocalizations to communicate with each other. In the wild, piglets form close social bonds with their mother and siblings. During experiments, pigs can learn to problem-solve from past experiences and exhibit positive emotional responses to rewarding environments.

Factory farmed pigs don’t have any of these opportunities.

Picture a pig who lives in a metal cage so small that she cannot walk or rotate her body. The pig’s excrement builds up in a pit underneath the cage, producing toxic ammonia that makes it difficult for her to breathe. She experiences painful toe lesions and joint damage caused by the hard concrete flooring of the stall. She instinctively wants to socialize, exercise, forage, and nest, but does not have the room or materials to do so. It is difficult for her to move at all because the lack of exercise has greatly weakened her bone and muscle. Without any kind of social or mental engagement, she becomes severely depressed and unresponsive to external stimuli. If she is fortunate enough to survive her time in this enclosure, called a gestation crate, the trauma of the experience will cause her to be unnaturally aggressive after she is released. Most sows (mother pigs) in factory farms are caged in gestation crates for the duration of their pregnancies.

Wild and ethically farmed chickens spend their time foraging, dust-bathing, walking, and caring for their chicks. They possess the ability to count, can learn from observing the actions of other chickens, communicate with each other, can keep track of time, and can form mental images. These are not mindless, alien, robotic beings. These are thinking, feeling individuals, in the same way that a pet dog is a unique individual.

Now imagine a hen who lives in a tiny cage and cannot spread her wings or walk more than a few steps—if there’s even any room to walk at all. Part of her beak was chopped off a few weeks after she was born, without anesthetic, to stop her from constantly pecking at other chickens out of confusion. This has left her with chronic pain in the damaged nerve endings of the mutilated beak. Like the confined sow, she instinctively wants to nest, dust-bathe, and forage, but she can’t even turn around in her tiny cage and there aren’t any natural materials to nest or forage in, anyway. She lives in her own excrement, which breaks down into ammonia, burning her skin and eyes and making it difficult to breathe. She is slaughtered when she stops producing eggs as efficiently, a year or two after she is born, even though she would have otherwise lived for five to ten years.

The life of a chicken or turkey raised for meat, known as a “broiler”, is not much better. Imagine a broiler chicken living on the floor of an overcrowded, windowless shed where thousands of chickens are packed together, each with about a square foot of room. Like the caged hen, he faces chronic pain from ammonia burns and debeaking. His lineage was selectively bred to yield the most meat possible, so he is four times heavier than chickens naturally weighed before the advent of factory farming. His feet and bones literally cannot support this extra weight, so he can barely walk and suffers excruciating lesions, fractures, and deformities in his legs. As a result, he spends a large portion of his life effectively immobilized. His unnatural size prevents his lungs and cardiovascular system from working properly, putting him at high risk for painful and immobilizing metabolic diseases. If he wants to rest, he is interrupted by other chickens walking over him, since the floor is so crowded. He is killed fewer than two months after he was born.

Often without sunlight, space to move around, or adequate mental stimulation, factory farmed animals unsurprisingly show signs of chronic stress and pain. While measuring animal welfare is an imprecise science, there is a wealth of behavioral and biological evidence that factory farmed animals—primarily pigs, chickens, turkeys, fish, and cows—are experiencing immense amounts of suffering.

Intensively confined animals simply cannot meet their basic physiological and psychological needs, such as physical mobility, mental stimulation, and instinctual behaviors like foraging and nesting. Animals in factory farms display unnatural, repetitive behaviors called stereotypies, which are generally considered to be an indicator of suffering. For example, factory farmed minks in fur farms chew on their own fur out of boredom and factory farmed pigs can spend hours biting the bars of their cages or each others’ tails.

There is also strong evidence that factory farmed fish are suffering. Raised in extremely crowded tanks where disease is widespread, farmed fish experience such high levels of stress that they develop a form of “depression” where they stop swimming, eating, or responding to stimuli.

Contrary to popular belief, the dairy industry involves great amounts of cruelty as well. Dairy cows are separated from their offspring soon after giving birth, causing them to cry in anguish for days. Male calves obviously cannot produce milk, so they are either shot soon after being born or turned into veal. Veal production requires that calves are chained inside of “veal crates” and killed when they’re only a few months old. The dairy cows themselves are also slaughtered when they stop producing enough milk.

Finally, all kinds of factory farmed animals are mutilated without anesthetic through painful procedures like cattle branding, castration, debeaking, and tail-docking. These procedures can even cause chronic pain for the rest of an animal’s life.

Over 9 billion land animals are slaughtered each year in the United States, and 99 percent of them are raised in factory farms. While some factory farms are much worse than others, most of these 9 billion animals live short, nightmarish lives filled with extreme suffering, only ever seeing the inside of cramped enclosures and slaughterhouses.

How could the lives of factory-farmed animals be anything other than miserable? How could it ever be morally permissible to bring sentient beings into this kind of existence?

The story continues in Part 2.