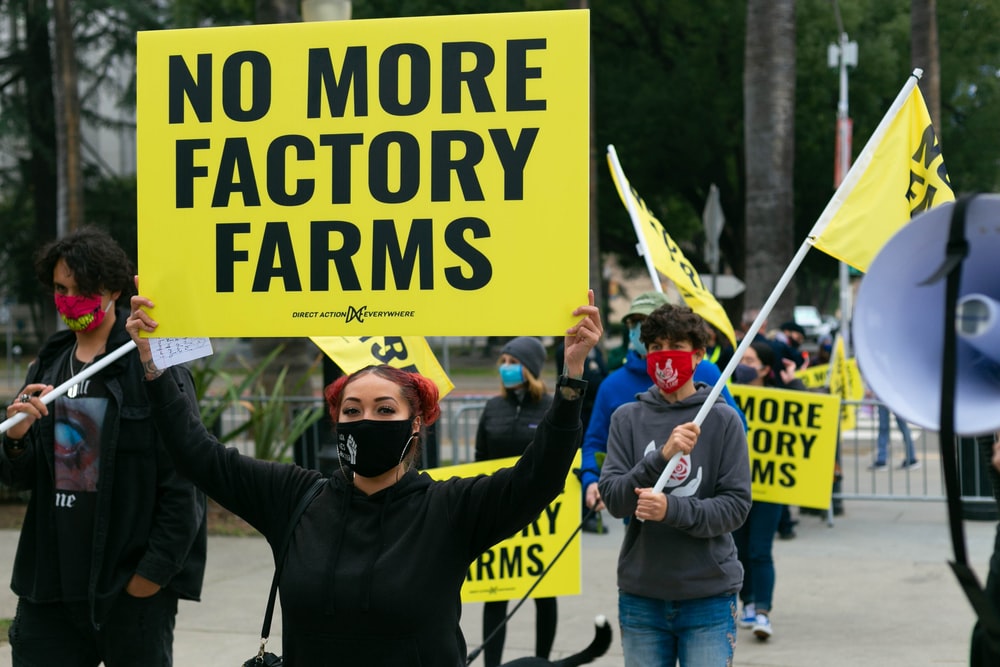 When something terrible is happening, resistance can give us hope. Maybe you want to resist factory farming, but you’re not sure where to begin.

While factory farming is a systemic issue that can most effectively be tackled through systemic change, you can make a surprisingly large difference even if you aren’t actively involved in animal welfare activism.

Buying cage-free eggs or “humane”-certified meat is a genuinely good start, but these basic labels are usually misleading. For instance, cage-free hens usually are crammed into overcrowded indoor sheds, just like broiler chickens. There are no legal requirements for the term “free-range,” except when applied to chickens, in which case it does not require anything more than a few minutes of outdoor access a day. “Grass-fed” animals are fed grass instead of grains, but are not actually required to be kept on outdoor pastures. The USDA Organic label has ambiguous and unenforced animal welfare standards that would have been overhauled in 2017 if not for the Trump administration’s interference.

If you truly want to avoid paying for factory-farmed animal products, there are a few solid options. You can choose to only consume animal products with the most rigorous humane labels—that is, Animal Welfare Approved or G.A.P. Level 5. Each of these humane labels requires that farmed animals are provided with sufficient open space, given social and physical enrichment, and are not subject to cruel procedures or painful slaughter.

You can also choose to only consume animal products from farms that you’ve verified to be genuinely humane after researching or visiting those farms yourself. Or, you can just reduce meat, dairy, and egg consumption as much as you can handle—perhaps by going vegan, which is also the most climate-friendly option and is healthy according to nearly all major nutritional organizations.

If none of these options appeal to you, eliminating or reducing factory-farmed eggs and factory-farmed chicken will have a much greater impact on animal welfare than cutting out beef or dairy.

This is true because one cow produces a lot of beef and milk relative to the amount of meat and eggs that one chicken produces. It also means that replacing red meat with chicken or egg-based meals will actually increase animal suffering.

One common response to ethical veganism is, “but what about sweatshop labor?! Aren’t you ignoring the exploited humans in the agricultural and garment sectors (e.g. sweatshops)?”

Improving labor rights is important and a worthy cause, but that doesn’t make animal welfare concerns any less valid.

Furthermore, there is another key distinction between worker exploitation and factory farming: while human rights violations in sweatshop labor are terrible, the act of refusing to buy goods made in sweatshop conditions doesn’t actually improve the lives of laborers—unlike movement-driven labor activism that genuinely empowers workers. (Though you could make an exception for organized boycotts that workers themselves are calling for.)

Factory farming is different. The act of buying factory-farmed animal products will actually increase animal suffering on average, as explained above.

It is uncomfortable, isn’t it?

Instead of running away from that uncomfortable feeling, work up the courage to embrace it. Let it motivate you to stop supporting factory farming, whether that’s by looking for rigorous humane labels (remember, Animal Welfare Approved and G.A.P. Levels 4 to 5 are genuinely humane while many others, like American Humane Certified, are not) or by reducing or eliminating consumption of animal products — particularly chicken and eggs.

Keep in mind that animal-based restaurant food also usually comes from factory farms. Some people who want to only buy humane products may not consider that.

You can also help by donating to the most effective charities that are working to improve farm animal welfare.

If you’re really inspired by this article, you may want to volunteer for a farm animal advocacy organization yourself!

It’s also worth noting that some factory farms are much worse than others, mostly because animal welfare organizations have successfully advocated for laws that ban certain inhumane practices, such as gestation crates for pigs, in certain jurisdictions. And most factory farmed beef cows, in particular, don’t live under conditions nearly as bad as other factory farmed animals. (Too bad that cattle farming is one of the most destructive forms of agriculture to the Earth’s climate.)

The scale and nature of farmed animal suffering is akin to a cosmic horror in the Lovecraftian sense; it is something so terrible, vast, and fundamentally unknowable that one feels small in the sea of qualia permeating the Earth’s biosphere.

Factory farming is a real-life dystopia. It has created a world where massive numbers of sentient individuals are subjected to some of the bleakest conditions imaginable for the pleasure and profits of the relative few.

Factory farming is a kind of hell. Humanity has decided to play God and has condemned billions of sentient beings to torturous damnation, generation after generation, just for the sin of being “food animals.”