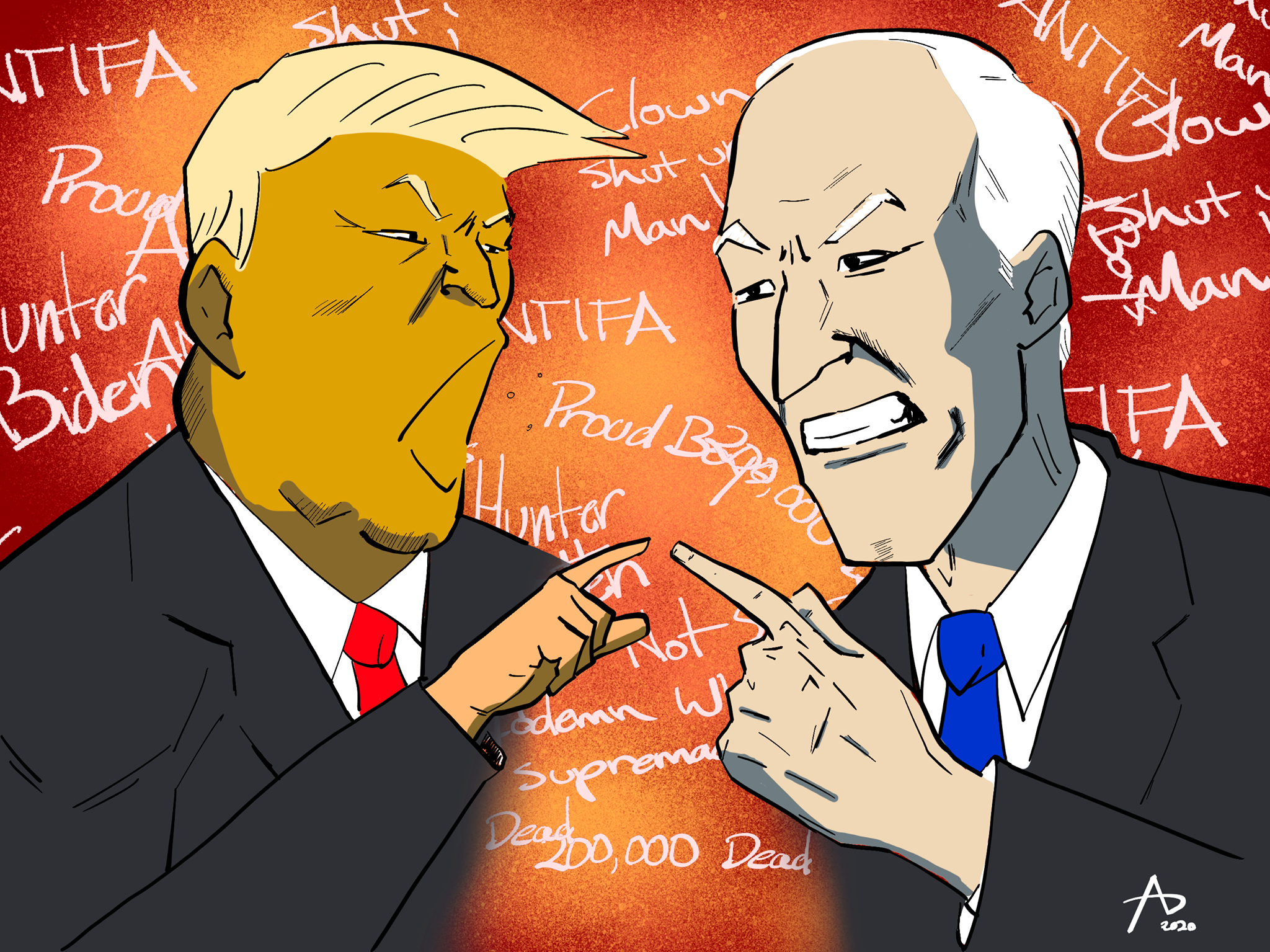 Illustration by Editorial Cartoonist Adlai Brandt-Ogman ('21). A chaotic first debate of the 2020 election highlighted polarization and is unlikely to have changed much of anything heading towards November.

On September 29, the two primary candidates for the upcoming presidential election, Donald Trump (R) and Joe Biden (D), faced off head to head for the first time. It was, in a word, chaotic.

While this election has already been heralded as one of the most important in history by teen influencers and major media outlets alike, this debate was anything but presidential. The evening was fraught with moments of both candidates talking over one another, personal attacks, and the moderator, Fox News’ Chris Wallace, constantly reminding the nominees not to interrupt each other.

As is typical of these debates, many of the questions asked were only answered in part, if at all. One such instance of this involved a question about the economic recovery from the coronavirus slump. Both candidates initially responded to the question posed, but their answers quickly devolved into fear mongering and hyperbolic messages. In between moments of incomprehensibility, however, we were able to get some important information about the character and policies of each candidate.

Perhaps the most notable moment of the evening came when Wallace challenged Trump to publicly denounce the actions of white supremacists. Rather than a simple “yes” or “no,” Trump instead went on to denounce Antifa, which was not unexpected, as Trump has been outspoken in his condemnation of the direct action, often violent, far-left political movement. Trump simply brushed past the question, saying that Antifa “is not a right wing problem.” Aside from this display of racism, Trump also continued to call the coronavirus the “China plague,” perpetuating the insensitivity that has been so broadly criticized by the mainstream media.

In terms of the current epidemic, Biden wasted no time condemning Trump’s slow response to the virus. Trump, on the other hand, continued to insist that Biden’s plan to shut down the country is useless. Despite this, Trump also claimed that had Biden been listened to when the virus hit, “millions of people” would have died. There were jabs exchanged about Trump’s rallies due to the large crowds present. Biden cited concerns about the health of the attendees, while Trump said that if Biden could “get the crowds, [he] would have done the same thing.”

The two candidates also swiped personal attacks on one another’s families. In particular, Trump fired shots at Hunter Biden, saying that he was “dishonorably discharged” from the military due to his drug addiction. Biden responded that this simply wasn’t true, stating that he was proud of his son for overcoming his dependence. Fact-checking teams at USA Today and the BBC have found that Hunter was not dishonorably discharged. Hunter spoke publicly about his issues with drug and alcohol addiction in a 2019 interview with The New Yorker.

As far as election integrity goes, Trump continues to worry that mail-in voting brought on by the dangers of the coronavirus will lead to fraud, only a week after he refused to commit to a peaceful transition of power in the event of a Biden victory. He also claimed that mailmen are “selling the ballots” and that they are being dumped in rivers. Biden, on the other hand, stated that “there is no evidence at all that mail-in voting” leads to fraud.

All in all, it was a baffling night. News outlets from CNN to Fox News have expressed disappointment at the incomprehensible moments of squabbling between the candidates. Even Wallace struggled to stay above the fray, at times having to raise his voice in order to be heard by either candidate. This debate could hardly be considered a win by either party, because, although Biden’s points were perhaps less controversial, many younger voters felt frustrated by a lack of passion and zeal.

As far as how this may sway undecided voters, it’s unlikely that much has changed. The truth of the matter is that those who support Trump made up their minds long ago. Those who are desperate for a change are willing to vote for anyone that isn’t Donald Trump, while those who are abstaining from voting or opting for a third party will likely remain unconvinced by the lack of passion in Biden’s words.

Emma (‘24) is undecided in her major, but she is interested in political science, cognitive science, and psychology. She is from Houston, Texas and has volunteered extensively with animal shelters in the area. Emma enjoys listening to music, writing, and bingeing shows on Netflix.