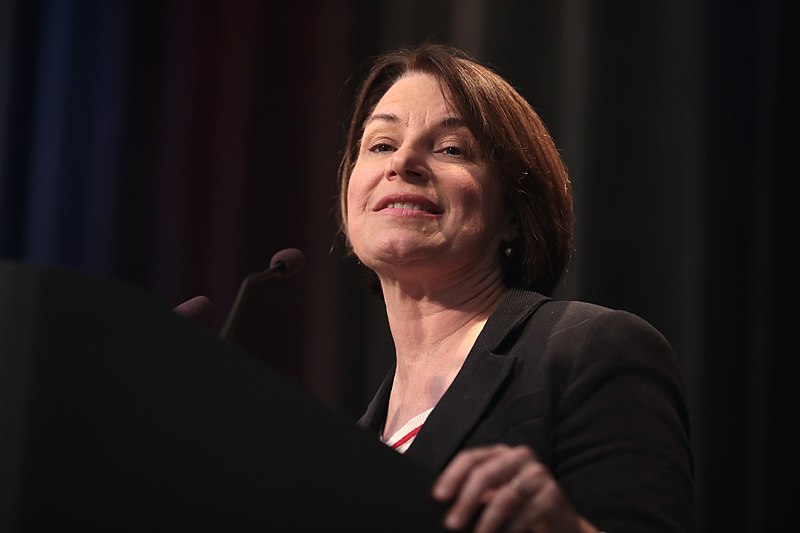 A cursory analysis proves that staff abuse by men in Washington gets reported on constantly. This undermines Klobuchar defenders' allegations that the coverage of her alleged abuse is gendered.

Minnesota Senator Amy Klobuchar on Wednesday said that she will take to Boom Island Sunday, where she is widely expected to announce her candidacy for the Democratic nomination for President.

The three term Senator, often described as being “Minnesota nice,” is well known in political circles for her subdued public persona and her ability to rack up massive re-election margins in her home state thanks to her unique appeal to rural voters. Though her national name recognition is lacking compared to potential opponents like Senator Bernie Sanders and Vice President Joe Biden, many commentators believe Klobuchar could prove a formidable contender for the nomination.

But all is not rosy in Klobuchar land. Shortly after she tweeted about her Boom Island announcement, a BuzzFeed report resurfaced longstanding concerns–which have bubbled up from time to time but never quite reached fever pitch until now–that Klobuchar has a habit of severely mistreating her staffers.

While previous reporting on this had often come in the form of subtle hints and whispers, as well as inferences drawn from staff turnover data–such as a Politico article which speculated that she was one of the ‘worst bosses’ in Congress based on her having the highest staff turnover–this report was far more substantive.

Former Klobuchar staffers told BuzzFeed reporter Molly Hensley-Clancy that Klobuchar had often exhibited a pattern erratic and apoplectic behavior towards her underlings that bordered on the extreme. The Senator would reportedly become enraged at staffers over small mistakes such as forgetting to charge her Ipad, spelling errors in documents and even the use of staples or paper clips at times when the Senator found those objects unfavorable. Klobuchar was also reportedly known to make staffers cry on a regular basis. She once even mistakenly hitting a staffer in the face with a binder after throwing it during an outburst.

The question of whether or not this conduct should matter is not what this piece aims to tackle, although there is some evidence that it should. Klobuchar’s conduct has apparently made it difficult for her to staff her campaign, with three people withdrawing from consideration for top jobs in her operation. The report also noted that some staffers drew parallels between Klobuchar’s treatment of her staff and reports of President Trump’s staff mistreatment, which has culminated in the most chaotic and toxic White House in living memory. Voters may be wary of elevating yet another Trump-like manager to the top political office in the land

This piece is instead meant to confront defenders of Klobuchar who claim that reports of her misconduct are the product of deep-rooted sexism in the media. Some feminists have hit at BuzzFeed and other sources reporting on the story by asserting that male politicians do not receive the same level of scrutiny in the media for their staff mistreatment.

These attacks from anonymous sources on Amy Klobuchar are a bunch of gendered bullshit. On any given day at the White House, Trump is doing ten times worse, but for him he’s a “strong man.” Women reporters you especially should know better. This is no better than is she likable.— Amy Siskind 🏳️‍🌈 (@Amy_Siskind) February 9, 2019

I interned for @amyklobuchar in 2014. It was an honor. Amy ran an office that held each of us to the highest standard. It has made me a successful working professional today. Oh, and by the way, she wouldn’t be making headlines if SHE WERE A MAN. #bosslady #klobuchar2020— Paget (@PagetPengelly) February 8, 2019

I feel like this would be treated very differently if she were a man...— Boo Boo The Fool (@Ralfwhale) February 8, 2019

So, if Amy Klobuchar were a man, would her abuse have gone unreported? To find out, let's take a look back at recent staff mistreatment scandals and compare the level of coverage.

Consider President Trump. Anyone who has kept up-to-date with political news during the Trump era (i.e. everyone) has doubtless seen at least one of the many reports from every outlet in the media landscape chronicling Trump’s uniquely inept and abusive mismanagement of his White House staff. In March 2018, Axios quoted a White House insider describing the Trump White House as "The most toxic working environment on the planet,” which was then picked up by MSNBC, Business Insider and Yahoo News. And that was all in one two-day period.

The abusive and toxic manner in which Trump treats his staff has also been the subject of several books, such as Vassar alum Michael Wolff’s 2018 bestseller “Fire and Fury” and Bob Woodward’s appropriately titled “Fear: Trump in the White House.” Some conservatives even argue that the internal toxicity of the Trump White House is far too often reported by the mainstream press at the expense of covering substantive policy issues.

As the most exposed and public political figure in the country, Trump is the best person to compare to Klobuchar at this point in time. Klobuchar is seeking to challenge Trump for that high-exposure position, and thus will naturally be subject to the same level of media scrutiny. It also should be noted that Trump's reported staff mistreatment, unlike Klobuchar's, has never even risen to the level of physically harming a member of his staff.

But let’s give Klobuchar and her defenders the benefit of the doubt for a moment and say that, as someone with minimal national name recognition, it’s not fair to compare her to the most prominent figure in the country. How does she compare to lesser-known political figures?

Take Dr. Ronny Jackson, the White House physician from 2006 to 2018. In April 2018, Jackson was nominated by Trump to serve as Secretary of Veterans Affairs, one of the lowest ranking, and therefore least exposed, positions in the cabinet. Shortly after his name was put forward, reports surfaced that Jackson was often drunk on duty–leading him to mistreat his staff–and even gave out pills haphazardly, earning him the moniker “candy man.”

This led to a media firestorm that dominated headlines for more than a week. According to Google trends, there were more than twice as many hits for “Ronny Jackson” from April 22nd to April 28th as there are for “Amy Klobuchar” now. So, despite the fact that Klobuchar is vying for a much higher office than Secretary of Veterans Affairs, her staff mistreatment, which includes physical altercations, has induced much less media attention so far.

Even male politicians who are significantly more obscure than Klobuchar have had their staff mistreatment reported on by the media. While Klobuchar topped Politico’s “worst bosses” list in the Senate, one of the worst in the House was was South Carolina Representative and former Governor Mark Sanford.

Despite being a relatively obscure figure whose most notable act was an extra-marital affair while he was Governor, Sanford’s ornery and demeaning behavior towards his staff, which never quite reached the point of abuse, was vividly chronicled by one of his former staffers in an acclaimed book, “The Speechwriter.”

Former Representative Tom Garrett was reported by Politico to have treated his staff like servants, making them pick up groceries and even dog poop. These allegations prompted Garrett not to run for re-election in 2018. He cited alcohol abuse as the culprit and promised to seek treatment for alcoholism.

Another Politico report outed former Representative Tim Murphy for creating a toxic work environment in which staffers were often subjected to verbal abuse. This came in the midst of reports that the pro-life congressman pushed his pregnant mistress to have an abortion, prompting him to resign as well.

The list goes on. Indiana Congressman Todd Rokita, who ran for US Senate but lost in the primary, had his toxic work environment reported on in the Chicago Tribune. Vermont Senator Bernie Sanders’ curmudgeonly behavior towards staffers, which is now widely known, began with a report from an alt-weekly newspaper in Vermont back when he first announced his run for President.

Even state lawmakers like Pennsylvania Lieutenant Governor Mike Stack and Washington state lawmaker Jesse Young have seen their staff treatment scrutinized by the press. Nobody is immune to the spotlight.

The claim that male politicians do not have their staff mistreatment reported in the media is simply unfounded. To state otherwise is to ignore mountains of evidence to the contrary. Claims of Klobuchar’s mistreatment are credible and should be confronted and address, not dismissed with blanket claims of gendered and sexist reporting. Anything less is a passive acceptance of staff mistreatment in Congress by both men and women.

POLITICO- The 'worst bosses' in Congress?

Washington Post - Does it matter if Klobuchar is a mean boss?