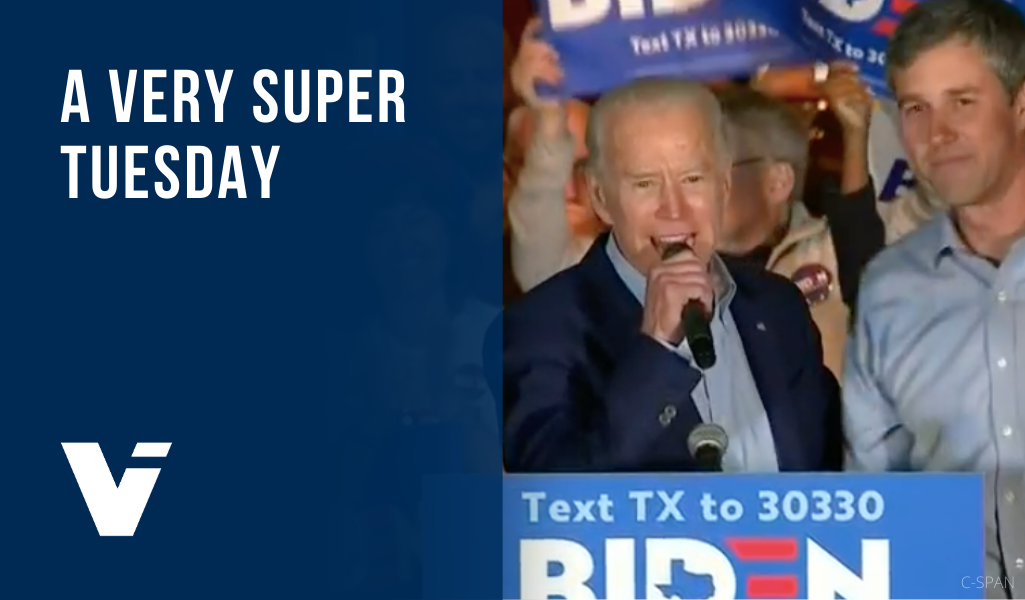 For a guy who finished an unimpressive fourth in Iowa and a dismal fifth in New Hampshire, former Vice President Joe Biden is having one hell of a good week. After finishing a distant second in Nevada, Biden had one of the most substantial rebounds in American political history in South Carolina.

Thanks to a steady performance in the South Carolina debate and an endorsement from House Majority Whip Jim Clyburn–the heaviest of heavyweights in both African American and South Carolina politics–Biden finished with nearly half of the votes in South Carolina relegating Vermont Senator Bernie Sanders, his main progressive rival, to a distant second at just 20%. He beat the RealClearPolitics polling average–and thus, by extension, expectations–by a whopping nine points, providing us with our first upset of 2020.

Biden’s shocking landslide in South Carolina has had considerable reverberations in both the short and long term.
‍

In the aftermath, Former South Bend Mayor Pete Buttigieg, who tied Sanders in Iowa and finished in a close second in New Hampshire before finishing a distant third in Nevada and fourth in South Carolina, dropped out. So did Amy Klobuchar, who gained momentum from a close third place finish in New Hampshire but failed to replicate that momentum anywhere else.

Both candidates endorsed fellow moderate Joe Biden on Monday. So did former Presidential candidate Beto O’Rourke, an early-rising star and leader in the polls who faltered due to a perceived lack of substance and was supplanted by Buttigieg.

They were joined by dozens of other major Democratic figures including former Senate Majority Leader Harry Reid, Senator and 2016 Vice Presidential nominee Tim Kaine and former Virginia Governor and DNC chair Terry McAuliffe. Biden also won endorsements from a litany of state leaders, primarily from Super Tuesday states. This process of establishment politicians backing a candidate en masse is frequently referred to as “The Party Decides.”

For some eventual Democratic nominees or establishment favorites, the party decided on their pick way earlier than the days leading up to Super Tuesday. Hillary Clinton already had a sizable portion of congressional endorsements locked up a year before the first primaries, and reached a massive majority of those endorsements in the months leading up to Iowa. But initially obscure or dark horse candidates like Barack Obama and Bill Clinton didn’t get the bulk of their establishment endorsements until well into the primaries.

But Joe Biden is not Barack Obama or Bill Clinton–charismatic young upstarts who rose from complete obscurity. Biden is a known quantity in politics, a Senator since the 1970s and a two term Vice President. The fact it took this long for the establishment to back him–and, notably, he still only has a small portion of the overall House and Senate behind him–is, if anything, a sign of great weakness.

The fact that the Democratic field featured 29 candidates, Mike Bloomberg’s candidacy and the strength of Bernie Sanders are all in part a response to Biden’s many weaknesses as a candidate. Unlike Hillary Clinton, Biden didn’t scare off potential challengers despite being the early leader in the polls and the assumed frontrunner.

That should come as no surprise to anybody familiar with Biden’s record. He failed to make headway during his first presidential run in 1988 due to accusations of plagiarism and fabricating his record; in the eyes of many liberals, he bungled the Anita Hill sexual harassment hearings; he was seen as something of a gaffe machine during his tenure in the Obama administration; he’s been called out for unwanted physical contact with women; and, at 77, he’s often seen as too old, with questions persistently swirling about the state of his mental health.

And yet, despite all that, Biden is currently surging in the polls on the heels of Super Tuesday. While pre-South Carolina polls had Biden trailing in many of the Southern states that are up for grabs, he’s now expected to sweep the South and perform strongly in Texas, California and Minnesota, all states that Sanders had hoped to clean up in.

In addition to South Carolina, this surge is thanks to the weakening of New York City Mayor Michael Bloomberg’s campaign–which was mainly predicated on the notion that Biden was a weak moderate standard-bearer–and Klobuchar and Buttigieg exiting the race. That clears up the moderate lane substantially and helps Biden build a larger coalition. Meanwhile, Elizabeth Warren remains in the race, garnering many progressive votes from Bernie Sanders in critical states.

So the question now is whether all this will matter. FiveThirtyEight’s model says the most likely outcome of Super Tuesday is that Biden emerges with a slight delegate lead, but it’s notable that Super Tuesday also features a big chunk of the Southern states–the region where Biden is strongest. Sanders still leads in a lot of locations outside the South and may perform well in post-Super Tuesday primaries.

So, while the model projects Biden to have a delegate plurality by the convention, the most likely scenario is still a contested convention. That is where no candidate receives a majority of delegates and suddenly it is up to pledged delegates and party insiders to pick the nominee. It would be, to put it simply, pandemonium, and would likely be disastrous for both Democratic unity and their general election chances.

There is some hope for Democrats. Barring an unprecedented polling upset, Warren and Bloomberg are not likely to garner enough delegates on Super Tuesday to be viable. They are more likely than not to drop out (Bloomberg has pledged to remain in the race until the end, but we’ve heard that one before). A two candidate-race would be less likely to end in a contested convention than a four-candidate race.

But still, Bloomberg and Warren dropping out might not produce the rosy results Democrats hope for. The ensuing battle between Sanders and Biden would galvanize their bases and sharpen the cleavages between establishment/moderate voters and progressive/outsider voters. And, at the end of all that, if Bloomberg and Warren win enough delegates on Super Tuesday and the remainder of the contests between Biden and Sanders are close enough, this could still end in a contested convention.

It’s no wonder, then, why Democratic insiders are so eager to line up behind Biden. They perceive him as more electable against Trump than Sanders, a democratic socialist whose electability strategy is based on turning out young voters, a constituency notorious for shirking elections. They’ve drawn comparisons between Sanders and McGovern, the 1972 Democratic nominee who lost to Richard Nixon in a 1972 landslide.

It’s hard to say who is truly more “electable,” in the general election. Any steadfastly confident predictions should be met with some healthy skepticism. But one thing seems more certain: the Democrats won’t have such an easy time dispatching Sanders this time around. In many ways, his candidacy echoes that of Donald Trump in 2016: an outsider railing against the system who has outlasted many more established, traditionally electable politicians.

In 2016, Sanders garnered an impressive 45% off Hillary Clinton, who was widely expected to soar to the nomination. This was a man whose April 2015 campaign announcement was at a lowkey press conference with a few dozen reporters in front of the capitol. At first, he wasn’t even running to win, just to get his ideas out there.

Imagine what Sanders can do now with 100% name recognition, a massive ideological movement, a more diverse electoral coalition than in 2016 and by far the best fundraising in the field. Even with their newfound unity, establishment isn’t as safe with Biden as they think they are. We’re in for one brutal battle in the coming months.