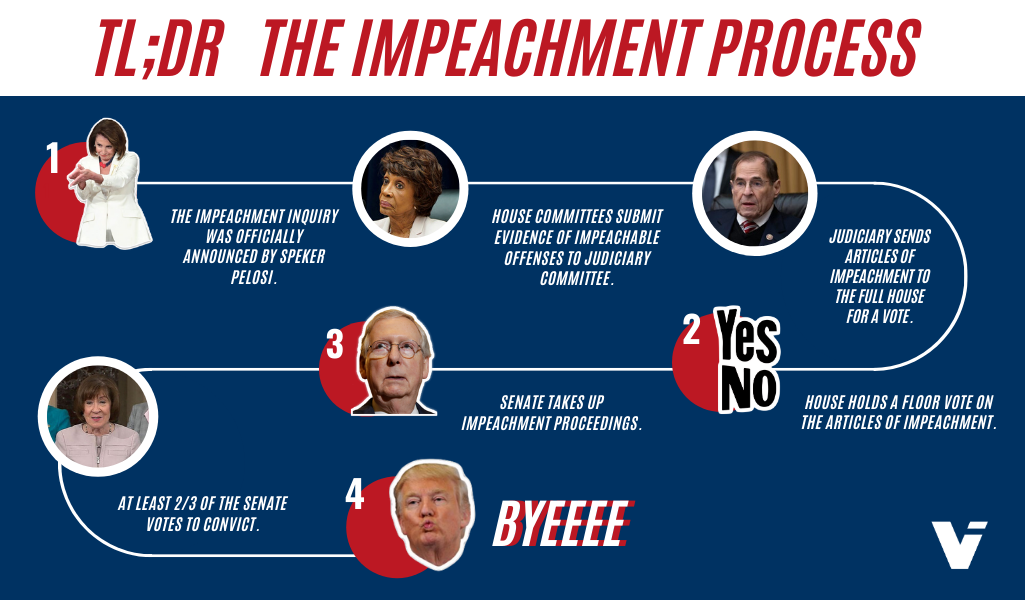 The Insider’s guide to impeachment

Last week, Speaker Nancy Pelosi officially announced the launch of an official impeachment inquiry against the Trump administration. This came after reports of a controversial call between Trump and Ukrainian President Volodymyr Zelensky.

There are two ways to initiate impeachment.

Any individual House member can draft and submit their own articles of impeachment for consideration by the House Judiciary Committee. This has happened several times during the Trump presidency. These have typically been efforts by rogue Democrats–such as progressive Al Green, who introduced a resolution in July to impeach Trump for telling several Congresswomen to “go back” to where they came from–that fizzled out due to lack of support from the caucus or Congressional leaders.

The second method, which speaker Pelosi has opted for, is more coordinated. Several committees–in this case, Judiciary, Intelligence, Oversight and Reform, Foreign Affairs and Financial Services–are investigating various aspects of Trump’s alleged misconduct, from his Ukraine call to his business dealings to his potential obstruction and covering up of evidence. They will then send the evidence they collect to the Judiciary committee.

If those investigations are like the police charging a suspect, the House Judiciary is the prosecutors determining whether there’s enough evidence to indict them.

Once the evidence is submitted to House Judiciary, they will continue the investigation, including subpoenaing witnesses and holding public hearings, to determine whether or not there is sufficient evidence to proceed with articles of impeachment.

The Senate first decides whether or not to dismiss the articles of impeachment. If the Republican-held Senate does decide to move forward, the terms of the trial would be established and the trial begins.

It is important to pause here and look back at Senate Majority Leader Mitch McConnell’s statement on holding a trial. According to the Washington Post, McConnell says a trial is inevitable if the House votes to impeach the president based on a 1986 memorandum by the then-Senate Parliamentarian Robert B. Dove. This is wrong and misleading. The Senate (and its Republican-majority leadership) has complete control over whether or not a trial is held.

For this trial, the Senate would function as the trial jury and the case would be argued by House-appointed managers and Trump’s lawyers. Here, the Chief Justice would serve as the judge for the trial proceedings. Removal from office would only occur if a supermajority–60%–of the Senate voted to convict.

Conviction is a near-impossible outcome as it would require over a dozen Republican senators–most of whom have been deeply loyal to Trump–to join with the Democrats in voting to remove him from office.

Why, then, is the House holding impeachment inquiries if the Senate is nearly certain to acquit and might even dismiss the articles of impeachment? Put simply, the House and Senate do not function as one, rather they operate as two entities within a unique political process. Impeachment and conviction are not exceptions.

In both cases where Presidents were impeached, the Senate voted to acquit. During the Clinton proceedings, his approval ratings remained steadily high and unharmed by the scandal. Many political scientists and politicians theorize that this may very well happen with the Trump impeachment proceedings, but the actual impacts are truly unknown and highly unpredictable. It’s worth noting that the nature of Trump’s scandals are very different, and polls are even beginning to show a majority of Americans are now in favor of his removal.

Quartz – How the impeachment inquiry could affect the 2020 US election

Julian (’23) is the Digital Editor. He is a prospective Science, Technology, and Society major with interests in educational and healthcare policy and urban studies. He is also a freelance designer, specializing in branding and digital design and management. He is from Turlock, California and enjoys bingeing his favorite Netflix shows with a good cup of coffee.