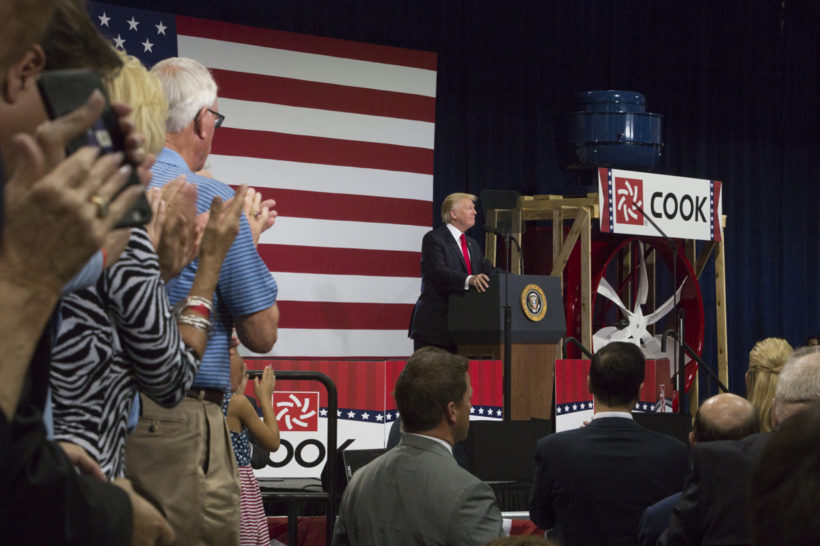 President Donald Trump is a menace to society. He’s homophobic and transphobic. He’s racist and xenophobic, sexist and probably guilty of sexual assault. He’s a literal existential threat when it comes to North Korea. He’s under investigation by the Congress and a special counsel. He’s hired a cataclysmic staff of far-right goons, incompetent buffoons, undeclared foreign agents and family members. And if Michael Wolff’s (Class of ‘75) book “Fire and Fury,” is correct which, after reading it I think it is, Trump is severely mentally unstable. Yet, despite his many faults and blunders, the economy is booming.

The Dow Jones has seen record after record smashed during the Trump administration, as has the S&P 500. While those indexes are not necessarily indicators of economic strength, they’re certainly not off the mark. Unemployment is way down, though it should be noted that black unemployment being down does not absolve Trump of charges of racism. GDP growth is relatively strong, especially compared to its sluggish rate in recent years, but it’s still below his promised 3% target. All in all, despite the nuanced points, the economy is doing very well– arguably better than it did for much of Obama’s Presidency, at least in some respects. But why? And is Trump to thank for the boom? In this piece, I hope to do a surface level analysis of Trump’s economic performance and perhaps a skin-deep autopsy of recent economic growth.

There has been a big question of who is responsible for our economic windfalls. Naturally, liberals have argued that Obama’s eight-year premiership precipitated this economic good fortune and that the economy is now taking off almost exclusively because of his shepherding. Polls suggest that a somewhat slim majority of Americans agree with this, though it should be noted that the percent of respondents who credit Obama has actually grown in the last two months. Right-wing commentators largely credit Trump, saying his pro-business policies and cutting of regulations have spurred investment, job creation and economic growth. Experts and economists are now starting to come out in the view that Trump is responsible as well. In reality, however, it’s a mix of both.

Donald Trump stated that he inherited a “mess” of an economy from Obama. That is simply not the case. Obama inherited an economy hemorrhaging 800,000 jobs a month. By the time he left office, the economy was creating roughly 250,000 jobs a month. Through things like the auto bailout, the economic stimulus package and a general steady economic hand, Obama brought us back from the brink. It is important to understand that while Trump may be responsible for some aspects of our current economic situation, Obama laid the scaffolding for it.

But in other ways, Donald Trump has had a very clear impact. For one, he is a Republican, and Republicans cut taxes. Not to mention they also cut regulations. This matters in two ways; expectations and reality. Because of the early expectation that Trump would enact business-friendly policies, consumer and investor confidence have skyrocketed. That is a big help to the market. But moreover, his policies have compounded on that. Trump’s tax reform bill has already begun to stimulate the market. Meanwhile, his cutting of regulations has made businesses very optimistic and willing to spur the economy. But despite all this bull market, the situation isn’t completely rosy.

Trump’s policies on immigration may begin to lead to a labor shortage and, despite promises that they will bring prosperity, might actually hurt the economy in the long run. Furthermore, his protectionist trade policies, including pulling out of the Trans-Pacific Partnership and renegotiating NAFTA may be having a negative impact as well. The US now has the worst trade deficit in a decade thanks to these policies. Finally, wages have failed to rise under Trump despite a booming economy. There are many reasons for this, but one may be the “middle-class squeeze,” a phenomenon in which wages fail to keep up with inflation. The squeeze may actually be worsened by Trump’s policies which tend to benefit the rich over the poor and middle class.

All in all, it’s a complicated situation. While Trump has been good for the stock market and businesses, those gains haven’t made their way downwards so far. Furthermore, it is probably not fair to discredit Trump for some of the recent economic gains as both his attitude and policies have spurred growth. However, this economic boom may soon turn into a bust; some experts are warning that there is a recession looming on the horizon. Can Trump be the steady economic hand that Obama was during the 2008 recession? Only time will tell, but personally, I doubt it.