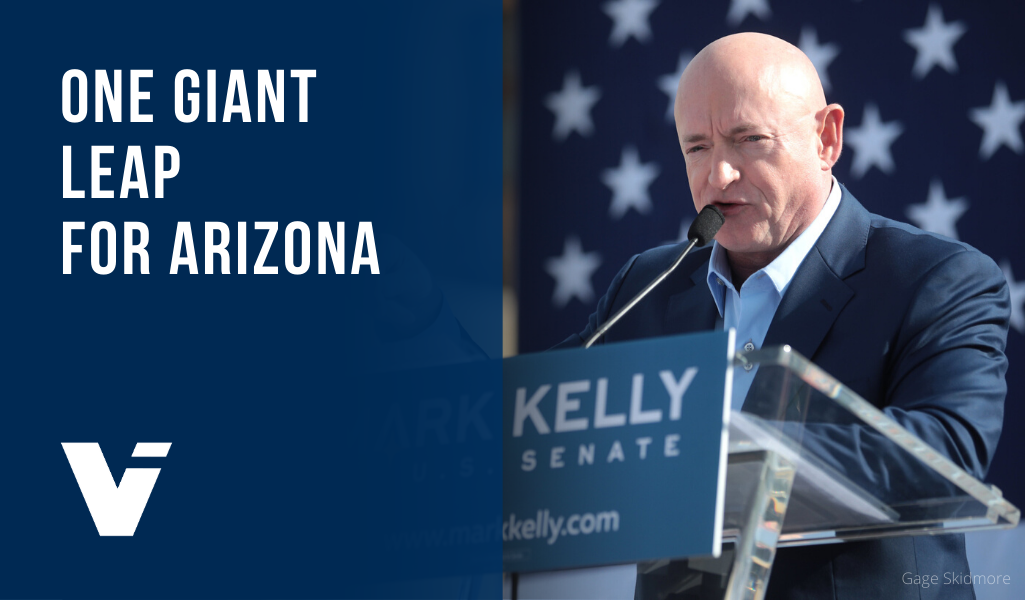 In 2016, Trump’s narrow 3.5-point win in the safely red state of Arizona was a hopeful signal for state Democrats. In 2018, Kyrsten Sinema’s Senate victory—making her the first Democratic senator from Arizona in thirty years—proved that liberals may be able to forge inroads in what may no longer be a conservative bastion.

This year, Mark Kelly has no plans to let Arizona’s newfound Democratic tide ebb. As soon as the retired astronaut announced his plans to challenge Republican incumbent Martha McSally, it was clear that the state’s lone GOP senator shouldn’t get too comfortable.

Appointed in late 2018 by Gov. Doug Ducey to fill the late Senator John McCain’s seat, McSally—a middle-of-the-road conservative with 22 years of Air Force service and two terms in the House of Representatives—was an inoffensive choice. Nonetheless, her otherwise ordinary appointment was tainted by the shadow of her narrow loss to Sinema for Arizona’s other Senate seat (vacated by Republican Jeff Flake) in the midterm election just weeks earlier.

Since filling McCain’s seat, McSally has emerged as a leader on common-ground issues such as tackling sexual assault in the military, but has cozied up to Trump (who has a razor-thin net approval in Arizona) time and time again on politicized issues such as Kavanugh’s confirmation and impeachment. Most recently, she made headlines when she claimed that “asymmetrical” people are responsible for the transmission of COVID-19 (she meant “asymptomatic”).

Her Trump-love and proclivity for the occasional gaffe could explain why McSally has a –9 point approval amongst independents and a high enough disapproval amongst Democrats to counteract any substantive Republican approval—lending her an overall rating that has been underwater since the third quarter of 2019 (interestingly, Sinema’s net approval is 17 points higher than McSally’s, at +14—an encouraging signal for Kelly).

In the past months, Kelly has managed to build a promising campaign on a moderate platform with talking points traditionally more progressive than his home state: advocating for the expansion of Medicare coverage (while maintaining a private option), strengthening reproductive rights, and tripling the size of the renewable energy industry.

For one, his status as a Navy veteran and retired astronaut lends him a certain heroism not unlike that of McSally, who served as the first woman to fly in combat in the Air Force. Second, his background lobbying for gun control with his wife, former Rep. Gabby Giffords—who stepped away from Congress after a gunshot wound to the head in 2011—has lent him a public affection transcending the partisan divisiveness of typical gun-rights rhetoric.

For a candidate looking to topple a pivotal GOP domino in a longtime conservative stronghold, Kelly’s 5-plus point lead in most recent polls is remarkable. Coming out of last summer, when Kelly appeared to be narrowly trailing McSally, it is clear that the Democratic campaign is gaining steam. With over $20 million raised, more than any other Senate candidate this year, it’s clear that he can sustain this momentum for the long haul.

Given the groundbreaking nature of Sinema’s narrow 1-point lead over McSally in 2018, the strength of Kelly’s campaign seems to be nothing short of amazing.

Looking to the future, it’s hard not to wonder what Kelly’s candidacy means for Arizona. Given President Trump’s striking unpopularity and Kelly’s notable popularity in the state, the possibility of Joe Biden carrying Arizona alongside Kelly is well within reason.

Only time will tell, though, whether this would mark the Arizona’s entrance into the center-left ranks of its neighbors New Mexico and Colorado, or whether this liberal swing is merely a transient protest of the Trumpian politics that so deeply violate the values of a state loyal to the country-over-party conservatism of John McCain.

A victory for Kelly would be a key part of flipping the Senate, where it looks increasingly possible that GOP Senators Susan Collins of Maine and Cory Gardner of Colorado will lose their seats. While these victories alone would not deliver control to the Democrats, Kelly’s victory would help blunt the likely defeat of Alabama’s Democratic senator, Doug Jones.

We can also wonder if Kelly’s popular candidacy will, in fact, boost the Democratic nominee for president—a sort of reverse coattail effect. Clearly, the leftward shift of Arizona in a presidential election cycle widely viewed as a toss-up could help offset the movement of swing states such as Ohio that are trending increasingly favorably towards the GOP.

While it is far too early to write off the state’s Republican Party, the question is worth asking: is Arizona the newest national battleground?‍

Roll Call - Where the money is: What fundraising in Phoenix and Tucson area says about the Arizona Senate race‍